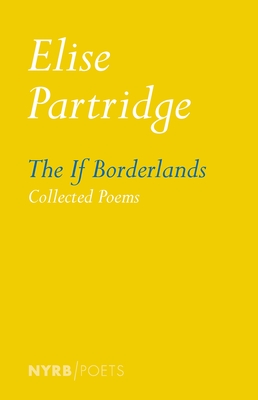 Elise Partridge’s poetry has been widely admired for its scrupulous truth to life and meticulous, glittering craft. Whether writing about family and friends, the natural world and the daily round, or serious illness, Partridge was, as Rosanna Warren has said, “a poet of brilliant precisions. Each line represents a new, glinting angle of thought. . . . The result is an art of eerie compassion and an almost hyper-realist perception of the small.”

This new collection includes all the poems that Partridge prepared for publication during her lifetime as well as a selection of uncollected or unpublished poems.

Praise For The If Borderlands: Collected Poems (NYRB Poets)…

"Fortunately, the body of work [Partridge] left behind has been given a second life by New York Review Books...It's an astonishing book that should secure Partridge some readers outside the mossy parapets of the poetry world. Like all great poets, she deployed words in unusual and memorable ways. But she always aspired to be clear, even entertaining...Like Plath, Partridge, at her darkest, was blazingly vivid. Her poetry seemed made of magnifying glass, under which swam brilliant images and metaphors." —Jason Guriel, Elle

"Friendship, houses, animals, new love—[Elise Partridge's] poetry made the most of these, as though early life’s eye was still present in certain places and moods. Elizabeth Bishop’s abiding influence is present here: Partridge’s poetry is the work of a consciousness feeling the variegated fabric of the world." —Anshuman Mody, Rain Taxi

"The poetry world lost a bright source of formal and emotional dexterity when Elise Partridge passed away in 2015....I don’t know of any other poetry like this. Partridge’s ability to combine the purely imaginative with the sociopolitical is bracing...they are simply solid poems that point, if anywhere, back into the shared histories of poetry and language, and that is our true loss: a poet with a clear-eyed sense of her tradition and how that tradition also rides the edge of the future. In the end we’re left with the work. And it shines." —Daniel Rzicznek, The Literary Review

"The If Borderlands, which collects the majority of the poems Partridge wrote during her lifetime, makes her achievement impossible to ignore.... Many of these poems may be written from the sickroom, but the poet opens her senses wide, leading to a rush of color—'Red digits blink: morphine drip / Chest a gauzy snowpatch, itchy with tape'—and a scramble to find a way to capture it all." —Carmine Starnino, The Walrus

“Partridge’s impressive poems pursue a careful thinker’s yearning for abandon, a loyal friend and partner’s wish for change. Attentive to fact, to what she sees and knows, Partridge nonetheless makes space for what is wild, outside and with us—for the fears and the blanks of chemotherapy, for sharp variations within (and without) frames of meter and rhyme, and for the welcome consistencies of married love. She has learned detail work, and patience, from Elizabeth Bishop, but she has made other virtues her own: riffs on familiar phrases open startling vistas and even her love poems get attractively practical. Hers is a welcome invitation: let’s listen in.” —Stephen Burt

“Partridge is a technical wizard for whom thinking and feeling are not separate activities. She is a hawk-like observer of the particular...many times ascending to pitch-perfect verse.” —Ken Babstock, The Globe and Mail

“Elise Partridge is a poet of brilliant precisions. Each line presents a new, glinting angle of thought. [Her] poems—good, tangy, and chunky on the tongue—somehow reflect life’s plenitude while maintaining their own spareness and balance. The result is an art of eerie compassion.” —Rosanna Warren

“There is no cynicism or pretension here, only the authenticity that comes from careful study of both word and world.” —Stephanie Bolster

“Reading [Partridge’s work], I find myself marveling at the luck of each person, place, thing, or circumstance, to have Elise Partridge’s exquisite and precise attention. And how lucky we are to get to listen in as she offers each of them her flawless ear.” —Jacqueline Osherow

“Elise Partridge brings the most mundane moments vividly to life.” —The Vancouver Sun

Elise Partridge (1958–2015) was born in Philadelphia and grew up nearby. After graduating from Harvard in 1981, she received a second Bachelor of Arts from Emmanuel College, Cambridge, as a Marshall Scholar. She returned to Harvard for a Master of Arts and then took a degree in writing from Boston University. In 1992 she moved to Vancouver, British Columbia, where she lived with her husband, a teacher of medieval literature, for the rest of her life. She taught writing and literature at several universities. Fielder’s Choice (2002) was a finalist for the Gerald Lampert Award for the best first book of poems published in Canada. Chameleon Hours (2008) won the Canadian Authors Association Award for Poetry in 2009, and was a finalist for the BC Book Prize that year. Her third book, The Exiles’ Gallery, was published in 2015. Partridge’s work has been anthologized in the United States, Canada, Ireland, and the United Kingdom, and has appeared in The New Yorker, Poetry, Southwest Review, Yale Review, Slate, The Walrus, The Fiddlehead, PN Review, and Poetry Ireland Review.
Loading...
or
Not Currently Available for Direct Purchase