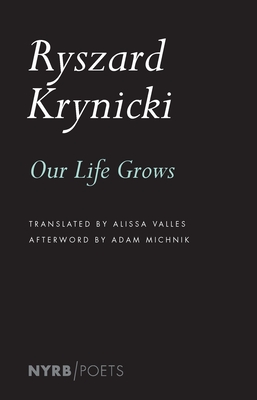 The Polish poet Ryszard Krynicki, born in a Nazi labor camp in Austria in 1943, became one of the most prominent poets of the New Wave generation of 1968, his poetry offering what Adam Michnik has called “a strange and beautiful marriage of Joseph Conrad's heroic ethics with a great metaphysical perspective.” Krynicki is the author of a body of work marked at once by the solitude of a poète maudit and solidarity with a hurt and manipulated community. Our Life Grows, published in Paris in 1978, was the first poetry collection to appear as Krynicki intended, beyond the reach of the Communist censorship that had crippled his earlier books. These poems, combining a biting wit and rigorously questioning mind with a surreal imagination, are a vital part of the story of postwar Europe.

“Krynicki has a rare gift of naming things even in shortest poems; he goes straight to the essence. Among Polish poets and readers he has the reputation of a master, of an archer who never misses.” —Adam Zagajewski

Ryszard Krynicki, one of Poland’s most important contemporary poets, was born in a labor camp in Sankt Valentin (Lower Austria) in 1943. Since the 1960s, when he became known as one of the poets of the New Wave, Krynicki has been associated with the democratic opposition in Poland. As a result, he was subjected to censorship and then banned completely from official publication between 1976 and 1980, although he continued to publish with unofficial presses and, in the case of Our Life Grows (1978), with the Paris émigré press Kultura. After working for years as an editor in underground publishing and running a private art gallery with his wife, Krystyna, in their Poznań apartment, he founded the influential publishing house a5 in 1988; from the start, the press focused on contemporary Polish poetry, including the works of Wisława Szymborska, Adam Zagajewski, and many younger poets. Krynicki is also renowned as a translator of German-language poets, including Nelly Sachs and Paul Celan. A recipient of many prestigious literary awards, he was most recently awarded the Zbigniew Herbert International Poetry Prize in 2015. He lives in Kraków.

Alissa Valles is the author of the poetry books Orphan Fire (2008) and Anastylosis (2014) and the editor and cotranslator of Zbigniew Herbert’s Collected Poems and Collected Prose.

Adam Michnik is a Polish newspaper editor, writer, and historian. He was jailed by the Communist government in 1968 and twice more in the 1980s and has written extensively about postwar Eastern European politics and history, life under a totalitarian regime, and moral and historical philosophy.
Loading...
or
Not Currently Available for Direct Purchase