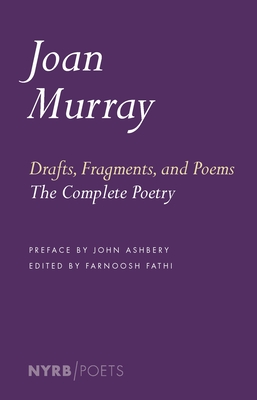 The first appearance of this award-winning writer's work since the 1940s, this collection, which includes an introduction by John Ashbery, restores Joan Murray's striking poetry to its originally intended form.

Though John Ashbery hailed Joan Murray as a key influence on his work, Murray’s sole collection, Poems, published after her death at the early age of twenty-four and selected by W. H. Auden for inclusion in the Yale Series of Younger Poets, has been almost entirely unavailable for the better part of half a century. Poems was put together by Grant Code, a close friend of Murray’s mother, and when Murray’s papers, long thought to be lost, reappeared in 2013, it became clear that Code had exercised a heavy editorial hand. This new collection, edited by Farnoosh Fathi from Murray’s original manuscripts, restores Murray’s raw lyricism and visionary lines, while also including a good deal of previously unpublished work, as well as a selection of her exuberant letters.

"Murray’s richly figurative language...manages to incarnate a refreshingly open space in which words seem only loosely tethered to familiar usages and meanings, even to tremble with new energies and possibilities....this new edition makes us consistently and movingly conscious of the extent to which all Murray’s writing was work-in-progress, expansive, provisional, exploratory, and wholly unaware, it can often feel, that it would ever be published and read. As Ashbery put it...when printed in their original versions Murray’s poems 'are given new space to breathe.'" —Mark Ford, The New York Review of Books


"Her poems are mystical, surreal, funny, and poignant in their playful visions of a future the poet wasn’t to have." —Meghan O'Rourke, Vulture, "9 Books of Poems That Prove 2018 Was a Fantastic Year — at Least for Poetry"
"Fathi’s precise but non-interventionist editing, along with her shrewd choice of letters and unpublished material, makes Murray’s writing feel new and alive again nearly eighty years after her death....Where some poets find their metaphors of making in nature, music or sculpture, Murray looks to the built environment. She pits the heady hereness and nowness of living against the structures that give it shape and hold it in. She is a poet of the senses as much as she is a poet of ideas; her ‘divergent sides and selves’ cohere not because they cancel each other out but because they invigorate and energise each other." —Patrick McGuinness, The London Review of Books


"Just a glance through the table of contents is a thrill: 'I Feel Only the Desolation of Wide Water,' 'Even the Gulls of the Cool Atlantic,' 'A Small Tale with Interruptions,' 'I Would Hold the Many Sides of Love with My Two Hands.' The odd titles make a promise the poems quite fulfill....Poet Farnoosh Fathi, upon reading that Murray's papers, long thought lost, were finally found in the archive her mother donated to Smith College, felt electrified 'with purpose.' She lit out for Northampton and became the first person to sift through it. The result is a new book in every sense - a new Joan Murray, yes, but a completely contemporary book too. It's still an open question as to whether American poetry can embrace a poet of such original vision, born in London of Canadian parents with an ear for authentic vers libre, an aesthete who sought truth in new forms, not causes or moralisms." —Ange Mlinko, Poetry

"In a letter to novelist Helen Anderson, a resolute Joan Murray wrote, 'I would rather be mad and bad, erratic and incomprehensible, than vulnerably acquiescent to the drab.' Note how the adjectives in her sentence point to the era’s stereotypes about women’s writing. Luckily for us, every single line in this darkly luminous book proves them to be unwarranted. Murray's poems, wise beyond her years, startle the mind in their brave embrace of dissonance." —Mónica de la Torre
"Had Joan Murray lived beyond her twenty-fifth birthday we’d already know her as a major voice in American poetry, instead of one whose name appears only in lists of the lost. Farnoosh Fathi's fascinating restoration of Murray’s work reinstates some of the poet’s deepest idiosyncrasies, and supplements the contents of the original lone volume with a hearty assortment of previously unpublished fragments and drafts. It arrives as a thrill, vivid with Murray’s irrepressible 'mountain of energy' and chewy with its 'own personal loud music.'" —Shanna Compton

"Up from the archives come poems that will make you feel you’re just learning to read: if vibration is your vocabulary, if unbelonging is your kind of charisma, if you have ever wanted to be a 'minnow-silver rain' or to fuck an ocean, if you’re prepared for an empathy so direct that you’d be right to call it otherworldly, Joan Murray is your poet." —Christine Hume

“Murray’s book seems to me a startling achievement for a poet who died at an even younger age than Keats, a month short of her twenty-fifth birthday.... The improbable poetic adventures her Poems offers have slipped into oblivion, like Eurydice, almost without a ripple.” —Mark Ford, Poetry

Joan Murray (1917–1942) was born during an air raid in London. She was the daughter of Stanley Webster Murray, a painter and illustrator, and Florence Margaret Murray, a diseuse. She spent her early years in London, Paris, and Ontario, and lived most of her short life in the United States, where she studied dance and theater, and poetry with W. H. Auden at the New School. She suffered from rheumatic fever as a child, the complications of which led to a chronic heart condition and eventually to her death.

John Ashbery (1927-2017) was the author of several books of poetry, including Self-Portrait in a Convex Mirror (1975), which received the Pulitzer Prize for Poetry, the National Book Critics Circle Award, and the National Book Award. His first collection, Some Trees (1956), was selected by W. H. Auden for the Yale Younger Poets Series. He also published art criticism, plays, and a novel. From 1990 until 2008 Ashbery was the Charles P. Stevenson, Jr. Professor of Languages and Literature at Bard College. His most recent collection of poems, Commotion of the Birds, was published in October 2016.

Farnoosh Fathi is the author of the poetry collection Great Guns and founder of the Young Artists Language & Devotion Alliance (YALDA). She teaches at the Stanford Pre-Collegiate Summer Institutes and lives in New York.
Loading...
or
Not Currently Available for Direct Purchase