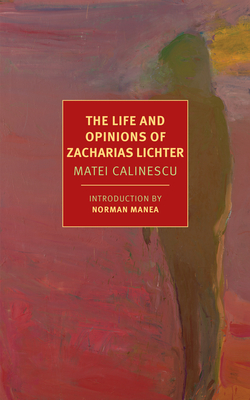 The Life and Opinions of Zacharias Lichter

Ugly, unkempt, a haunter of low dives who begs for a living and lives on the street, Zacharias Lichter exists for all that in a state of unlikely rapture. After being engulfed by a divine flame as a teenager, Zacharias has devoted his days to doing nothing at all—apart, that is, from composing the odd poem he immediately throws away and consorting with a handful of stray friends: Poldy, for example, the catatonic alcoholic whom Zacharias considers a brilliant philosopher, or another more vigorous barfly whose prolific output of pornographic verses has won him the nickname of the Poet. Zacharias is a kind of holy fool, but one whose foolery calls in question both social convention and conventional wisdom. He is as much skeptic as ecstatic, affirming above all the truth of perplexity. This of course is what makes him a permanent outrage to the powers that be, be they reactionary or revolutionary, and to all other self-appointed champions of morality who are blind to their own absurdity. The only thing that scares Zacharias is that all-purpose servant of conformity, the psychiatrist.

This Romanian classic, originally published under the brutally dictatorial Ceauşescu regime, whose censors initially let it pass because they couldn’t make head or tail of it, is as delicious and telling an assault on the modern world order as ever.

Praise For The Life and Opinions of Zacharias Lichter…

"A literary jewel of eccentricity seen as an ethical provocation, which created an unforgettable shock at a time when the mental stereotype imposed by the dictatorship was dimly trying to find the first slits for a breakthrough....The writer summons, in an artistic undertaking that is ever vigorous and vibrant, the fundamental questions of existence, the ephemeral and the transcendent stimulating each other in a dynamic exchange of energy, with original and seductive accords of lasting resonance." —Norman Manea

"A picaresque life of an imagined philosopher who speaks in torrents and trades in absurdity...[Lichter] lives up to what an acolyte of his calls 'a pedagogy of beguilement'." —Kirkus Reviews

Matei Calinescu (1934–2009), born and educated in Romania, was one of the leading intellectuals of his generation. His novel The Life and Opinions of Zacharias Lichter (published in Romanian in 1969) acquired cult status among generations of young people despite attempts by Romanian authorities to expunge Calinescu’s name and works from cultural memory. He emigrated to America in 1973 and established himself in his new homeland as a literary scholar, publishing his two major works, Five Faces of Modernity (1977; ultimately translated into eight languages) and Rereading (1993), and teaching in the Comparative Literature Department at Indiana University. After the collapse of Ceauşescu’s national-Communist dictatorship in 1989, Calinescu was welcomed once more in his home country. In a poll of literary critics conducted there in 2001, The Life and Opinions of Zacharias Lichter was ranked among the top ten Romanian prose works of the twentieth century. A sixteen-volume edition of his selected literary and scholarly works is currently in progress.

Adriana Calinescu is the Thomas T. Solley curator emerita of ancient art at Indiana University’s Eskenazi Museum of Art. She has written widely on the subject of ancient art and is the editor of the scholarly work Ancient Jewelry and Archaeology. She has translated works from English into Romanian, including Mary Shelley’s Frankenstein, which is the standard text in Romania.

Breon Mitchell is a professor emeritus of Germanic studies and comparative literature at Indiana University. A past president of the American Literary Translators Association, he has received numerous national awards for literary translations, including the Helen and Kurt Wolff Prize, the Aldo and Jeanne Scaglione Prize from the Modern Language Association, and the Schlegel-Tieck Prize from the British Society of Authors. His translations from the German include Franz Kafka’s The Trial and Günter Grass’s The Tin Drum, as well as works by Heinrich Böll, Siegfried Lenz, Uwe Timm, and Marcel Beyer.

Norman Manea has written numerous books of fiction and nonfiction, including the memoir The Hooligan’s Return and the novel The Lair. He has been awarded several literary prizes, including the MacArthur Fellowship, the Guadalajara International Book Fair’s (FIL) 2016 Literature in Romance Languages Award, and the Prix Médicis étranger. He is a professor emeritus and Distinguished Writer in Residence at Bard College.
Loading...
or
Not Currently Available for Direct Purchase