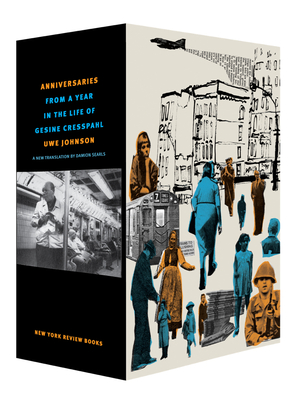 From a Year in the Life of Gesine Cresspahl

A landmark of 20th Century literature about New York in the late 1960s, now in English for the first time.

Late in 1967, Uwe Johnson set out to write a book that would take the unusual form of a chapter for every day of the ongoing year. It would be the tale of Gesine Cresspahl, a thirty-four-year-old single mother who is a German émigré to Manhattan’s Upper West Side, and of her ten-year-old daughter, Marie—a story of work and school, of friends and lovers and the countless small encounters with neighbors and strangers that make up big-city life. An everyday tale, but also a tale of the events of the day, as gleaned by Gesine from The New York Times: Johnson could hardly foresee the convulsions of 1968, but some of the news—the racial unrest roiling America, the escalating war in Vietnam—was sure to be news for some time yet to come. Finally, it would be a tale told by Gesine to Marie about Gesine’s childhood in a small north German town, of her independent and enterprising father, of her troubled mother, of Nazi Germany (Gesine was born the year Hitler came to power) and World War II and Soviet retribution and the grimly regulated realities of Communist East Germany. An ambitious historical novel as well as a wonderfully observed New York novel, Anniversaries would take in the unsettled world of the present along with the twentieth century’s ­disastrous past, while vividly depicting the struggle of a loving, though hardly uncomplicated mother and a bright, indomitably curious girl to understand and care for each other and to shape a human world.

Gesine and Marie are among the most memorable and engaging characters in literature, and Anniversaries, at once monumental and intimate, sweeping and full of incident, stylistically adventurous and endlessly absorbing, is quite simply one of the great books of our time.

Uwe Johnson (1934–1984) grew up in the small town of Anklam in the German state of Mecklenburg-Vorpommern. At the end of World War II, his father, who had joined the Nazi Party in 1940, disappeared into a Soviet camp; he was declared dead in 1948. Johnson and his mother remained in Communist East Germany until his mother left for the West in 1956, after which Johnson was barred from regular employment. In 1959, shortly before the publication of his first novel, Speculations About Jakob, in West Germany, he emigrated to West Berlin by streetcar, leaving the East behind for good. Other novels, The Third Book About Achim, An Absence, and Two Views, followed in quick succession. A member of the legendary Gruppe 47, Johnson lived from 1966 until 1968 with his wife and daughter in New York, compiling a high-school anthology of postwar German literature. On Tuesday, April 18, 1967, at 5:30 p.m., as he later recounted the story, he saw Gesine Cresspahl, a character from his earlier works, walking on the south side of Forty-Second Street from Fifth to Sixth Avenue alongside Bryant Park; he asked what she was doing in New York and eventually convinced her to let him write his next novel about a year in her life. Anniversaries was published in four installments—in 1970, 1971, 1973, and 1983—and was quickly recognized in Germany as one of the great novels of the century. In 1974, Johnson left Germany for the isolation of Sheerness-on-Sea, England, where he struggled through health and personal problems to finish his magnum opus. He died at age forty-nine, shortly after it was published.


Damion Searls grew up on Riverside Drive in New York City, three blocks away from Gesine Cresspahl’s apartment. He is the author of three books and has translated more than thirty, including six for NYRB Classics.

Praise For Anniversaries (Boxed Set): From a Year in the Life of Gesine Cresspahl…

“[T]he book seeks to be a comprehensive account of the ’60s, commenting on media coverage of Vietnam, housing segregation in Manhattan, the Prague Spring. At nearly 1,700 pages long, it is oceanic, and it is a masterpiece.”—Parul Sehgal, The New York Times, “Times Critics’ Top Books of 2019"

“[Anniversaries] requires a hard chair, a fresh pen and your full attention—for attention is its great subject … Searls’s superb translation inscribes Johnson’s restlessness and probing into word choice and the structures of the sentences themselves, which quiver with the anxiety to get things right, to see the world as it is.”  —Parul Sehgal, The New York Times

"Juxtaposing the tumult of 60s America with everyday life in Nazi Germany, Anniversaries chronicles 20th-century turmoil through the eyes of Gesine Cresspahl, who leaves postwar Mönchengladbach to raise her young daughter, Marie, on New York’s Upper West Side ... Against the big-picture backdrop, we get a fine-grained treatment of motherhood and migration ... It feels thrillingly spontaneous, almost out of control. You can certainly see why it wasn’t all translated before now. But here it is: a novel of a year, perhaps the novel of the year." —Anthony Cummins, The Observer

“Uwe Johnson’s Anniversaries is a book to live in: two volumes and more than 1,700 pages of roomy universe, robustly imagined and richly populated. Its streets are long, and its landmarks are varied. Sometimes the weather’s sultry, and sometimes the pipes clang in the cold. But Johnson’s rhythm is always patient, always mesmerizingly meticulous … Johnson’s observations are indeed possessed of a peculiar, sprawling omniscience. His opus belongs in the canon of encyclopedic, modernist German-language tomes like Berlin Alexanderplatz and The Man Without Qualities, and it allows itself divagations on everything from the prevalence of the color yellow in the American visual landscape to the subtleties of Hungarian politics … His writing is inhuman, godlike in its immensity.” —Becca Rothfeld, Bookforum

"Johnson’s book effectively gives the reader forty or fifty years of world history and a single year of Gesine’s life, every day from August 21st, 1967 to August, the 20th, 1968. Its scope is startling, from the social organization of a small German town, to Gesine’s work in a New York bank, to her father’s work as a master carpenter, running a business in Richmond, in London.” —Tom Sutcliffe, Saturday Review, BBC Radio 4

“I am absolutely stunned and slightly mortified that I’ve never heard of this book before … I think it’s extraordinary, I think it is a great late-modern masterpiece … How do you map Germany in 1933 with Vietnam? But, he does it, he does it in the first paragraph. It should be clunky or absurd or just slightly embarrassing, but he does it brilliantly. It contains the whole world. ... I was completely gripped, and there are none of the usual narrative handholds, there’s no romantic relationship, you’re never quite certain why she’s on her own, who the father of the child is—all of those props are not available to us, and still it’s absolutely extraordinary.” —Kathryn Hughes, Saturday Review, BBC Radio 4

“European modernists used the novel as a means of mapping metropolitan experience. From James Joyce’s immortalizing of ‘dear, dirty Dublin’ in Ulysses, to the grimy urban paean of Alfred Döblin’s Berlin Alexanderplatz, to Robert Musil’s elegy for imperial Vienna in The Man Without Qualities, the city was no longer merely decorative scrim but a collaborative possibility, the ideal vessel for consciousness. Uwe Johnson’s Anniversaries: From a Year in the Life of Gesine Cresspahl, a sprawling novel about an East German émigré and her 10-year-old daughter as they navigate life on New York’s Upper West Side, is a natural heir to this tradition …” —Dustin Illingworth, The Atlantic

“This book is truly a masterpiece. ... It is a record, and an enduring one for our whole post-Hitler era. You have actually made this past tangible and—perhaps a much harder task—you have made it convincing. Now I know how it was and is over there—know it down to the tips of my toes. ... This seems to be the only appropriate way to speak and think: about great-grandmother and grandmother and mother and child, in the interplay of generations and across two continents.” —Hannah Arendt, February 7, 1972, Letter to Uwe Johnson

"Johnson's novel is now regarded as a hugely significant work of world literature, and it is indeed huge—some 1,800 pages in the forthcoming two-volume publication from New York Review Books, the first complete publication in English. ... Anniversaries: From a Year in the Life of Gesine Cresspahl lives up to the hype. In my reading so far, it's carefully observed, utterly propulsive and resonant with meaning about a year I remember well, and I can't wait to finish it, though I concede that it will take some time. The bonus for me is local—Gesine lived 14 blocks south of where I live now—but Johnson's writing invites everyone into its riches." —Barbara Hoffert, Library Journal

“Uwe Johnson is the most incorruptible writer I’ve ever read, always searching for what we so frivolously call the truth. In Anniversaries he approaches this fundamental thing, the truth, from different sides,  across different continents, across time. Page after page, we are shown how we need to see clearly, without prejudice, to think properly. Page after page, thinking with Johnson offers us the greatest of pleasures.” —Jenny Erpenbeck

“A gripping, complex, highly significant work in which the author displays not only his mastery as a storyteller but also his humor, irony, and descriptive power.”  —The New York Times

“Johnson has Balzac’s passion for the telling detail, the revealing exactitude, here a passion that is impelled by the imagination of love. So intensely are the figures imagined—Gesine and her daughter, Gesine’s desolated mother, and all the tribe of Baltic relatives who variously endure and resist the Nazi scourge—that the ballast of Manhattan fact is needed to keep the book on the page, the life in focus, to keep the agony from getting out of drawing.” —Richard Howard
or
Buy Here
Copyright © 2020 American Booksellers Association