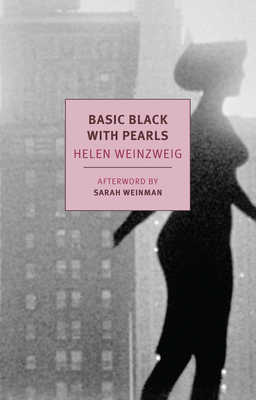 Shirley and Coenraad’s affair has been going on for decades, but her longing for him is as desperate as ever. She is a Toronto housewife; he works for an international organization known only as the Agency. Their rendezvous take place in Tangier, in Hong Kong, in Rome and are arranged by an intricate code based on notes slipped into issues of National Geographic. He recognizes her by her costume: a respectable black dress and string of pearls; his appearance, however, is changeable. But something has happened, the code has been discovered, and Coenraad sends Shirley (who prefers to be known as “Lola Montez”) to Toronto, the last place she wants to go. There the trail leads her through the sites of her impoverished immigrant childhood and sends her, finally, to her own house, where she discards her pearls and trades in her basic black for a dress of vibrant multicolored silk.

Helen Weinzweig published her first novel when she was fifty-eight. Basic Black with Pearls, her second, won the Toronto Book Award and has since come to be recognized as a feminist landmark. Here Weinzweig imbues the formal inventiveness of the nouveau roman with psychological poignancy and surprising humor to tell a story of simultaneous dissolution and discovery.

Praise For Basic Black With Pearls…

"As dazzlingly splintered and disorienting as a hall of mirrors, this marvelously inventive sleight-of-pen fantasy may (or may not) represent the jagged self-image of a middle-aged Canadian housewife....heavy on scenes from a rotten childhood and lightly dipped in madness—all of it delivered with spotlight-sharp images and iron-grey wit. Glittering, uncomfortable, one-of-a-kind fiction." —Kirkus Reviews

"Celebrated in Canada as a feminist classic, Weinzweig’s searing 1980 novel captures a woman’s awakening to her lover’s exploitation….Weinzweig’s prose style is sharp, particularly her dialogue: strange and surprising, it knocks every character interaction askew.” —Publishers Weekly

"Helen Weinzweig is a crafty writer, with a sure sense of timing; when the narrator finally manages to turn her back on her nightmares and pipe dreams, it is a happy ending that rings true." —The New Yorker

“Helen Weinzweig’s voice is original, her language startling and graceful, and the story she tells is as moving as a second chance. Basic Black with Pearls is a portrait of madness and delight—sensitive, funny and unique.”—Alice Hoffman

"Basic Black with Pearls is certainly a text worthy of a revisit, its theme of the danger of a limited life sadly as blisteringly significant as it was 35 years ago. The novel offers little resolution, and even less clarity, making it an all the more authentic commentary on the trappings of domestic, suburban life. The reader is left uncomfortable, disturbed and as lost as Shirley is—which is, perhaps, the most potent way Weinzweig could deliver her feminist message." —Stacey May

Helen Weinzweig (1915–2010) was born Helen Tenenbaum in Radom, Poland, and emigrated with her mother to Toronto when she was nine. As a teenager, she spent two years in an Ontario sanatorium recovering from tuberculosis; asked about the experience, she later recalled, “I read myself silly for two years.” In 1940, Helen married the Canadian composer John Weinzweig and for the next three decades dedicated herself to promoting his career while raising their two sons and organizing and working at a cooperative nursery school in Toronto. In 1968, her first short story, “Surprise!,” was published in Canadian Forum; no story or novel she wrote was ever rejected by a publisher. Her first novel, Passing Ceremony, was published in 1973, followed by Basic Black with Pearls in 1980, which won the City of Toronto Book Award. A short-story collection, A View from the Roof (1989), was nominated for the Governor General’s Award. A founding member of the Writers’ Union of Canada, Weinzweig also wrote stage and radio plays and taught at writers’ workshops in her later years.

Sarah Weinman is the editor of Women Crime Writers: Eight Suspense Novels of the 1940s & 50s and Troubled Daughters, Twisted Wives: Stories from the Trailblazers of Domestic Suspense and the author of the forthcoming nonfiction book The Real Lolita: The Kidnapping of Sally Horner and the Novel That Scandalized the World. Weinman’s work has appeared in The New York Times Magazine, The Washington Post, The New Republic, The Guardian, and other publications. She lives in New York City.
Loading...
or
Not Currently Available for Direct Purchase