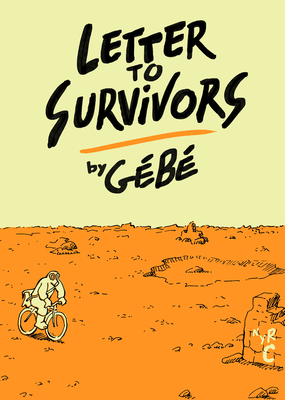 A haunting and darkly funny post-apocalyptic graphic novel that follows an unusual postal worker on his very bizarre mail route.


Amid the blasted rubble of a once-perfect suburb, a hazmat-suited postman delivers the mail, aloud.

He shouts his letters down a vent to the bunker-bound family below.

They describe the family's prosperous past life, and then get stranger and stranger...

Drawn by the famed cartoonish and Charlie Hebdo contributor Gébé, and never before available in English, Letter to Survivors is a blackhearted delight, a scathing, impassioned send-up of consumerist excess and nuclear peril: funnier—and scarier—than ever.

Praise For Letter to Survivors…

"Originally published in France in 1981, the late Gébé’s post-apocalyptic warning makes its English-language debut thanks to award-winning, superbly prodigious (300-plus translated graphic titles!) Gauvin. His astute, context-rich introduction to the multifaceted, Charlie Hebdo-famed Georges Blondeaux (“Gébé” is the French pronunciation of his initials), underscores—ironically, tragically, yet somehow comically—the timeless efficacy of this 'slim, disillusioned volume' about the perils of blind capitalism and imminent self-destruction." —Booklist, starred review


"Built on a foundation of whimsical gallows humor, this book bursts at the seams with lessons as relevant to the current state of the world as when it was first published in France over 35 years ago... Through black-and-white cartoon linework, the characters of the letters and the family they are being read to are brought to life in a manner as satirical and pointed as the lessons they are depicting.” —Publishers Weekly, starred review

Gébé (Georges Blondeaux; 1929–2004) was a fixture of the French press for almost fifty years. He was best known as a cartoonist, but he was also an author, lyricist, screenwriter, and dramatist; a maker of short films and photo-novels; and a beloved editor and nurturer of new talent. From 1970 to 1985, he was the editor-in-chief of Charlie Hebdo. He returned when the weekly was reborn in 1992 and served as the editorial director until his death.


Edward Gauvin has translated more than three hundred graphic novels, including Blutch’s Peplum (NYR Comics). His work has won the John Dryden Translation prize and the Science Fiction & Fantasy Translation Award and has been nominated for the French-American Foundation and Oxford Weidenfeld translation prizes. He is a contributing editor for comics at Words Without Borders and has written on the Francophone fantastic at Weird Fiction Review. Other publications have appeared in The New York Times, Harper’s, Tin House, World Literature Today, and Subtropics.
Loading...
or support indie stores by buying on