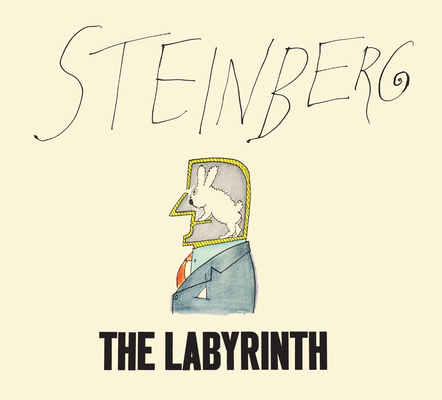 A seminal work by an artist whose drawings in The New Yorker, LIFE, Harper's Bazaar, and many other publications influenced an entire generation of American artists and writers.

Saul Steinberg’s The Labyrinth, first published in 1960 and long out of print, is more than a simple catalog or collection of drawings— these carefully arranged pages record a brilliant, constantly evolving imagination confronting modern life. Here is Steinberg, as he put it at the time, discovering and inventing a great variety of events: "Illusion, talks, music, women, cats, dogs, birds, the cube, the crocodile, the museum, Moscow and Samarkand (winter, 1956), other Eastern countries, America, motels, baseball, horse racing, bullfights, art, frozen music, words, geometry, heroes, harpies, etc.” This edition, featuring a new introduction by Nicholson Baker, an afterword by Harold Rosenberg, and new notes on the artwork, will allow readers to discover this unique and wondrous book all over again.

Famed worldwide for giving graphic definition to the postwar age, Saul Steinberg (1914–1999) had one of the most remarkable careers in American art. While renowned for the covers and drawings that appeared in The New Yorker for nearly six decades, he was equally acclaimed for the drawings, paintings, prints, collages, and sculptures he exhibited internationally in galleries and museums. He published nineteen books in his lifetime, including The Art of Living, The New World, and The Discovery of America.

Nicholson Baker is the author of ten novels and six works of nonfiction, including A Box of Matches and The Anthologist, both New York Times Notable Books of the Year, and Double Fold, which won a National Book Critics Circle Award.  His work has appeared in The New Yorker, Harper’s, and The New York Review of Books. He lives in Maine with his family.

Harold Rosenberg (1906–1978) was an art historian and critic who is remembered as one of the most incisive and supportive critics of abstract expressionism. He was a regular contributor to The Partisan Review and served as an art critic at The New Yorker.

Praise For The Labyrinth…

“Aggregating Steinberg’s published works and private sketches, The Labyrinth represents not just his creative output but also a diary of sorts. A significant portion consists of drawings of people and landmarks he saw during his 1956 trip to Russia on assignment for The New Yorker, and there are selections from his mural The Americans from the American Pavilion at the 1958 World’s Fair in Brussels . . . Scenes of everyday life and abstract cartoons form a panoply of views of society as Steinberg saw it during this time period. No one had an eye like he did on the world around him.” —Dan Schindel, Hyperallergic

“The book opens with an extended, tour-de-force version of a Steinberg classic, the Line, seven pages unified by a single horizontal line that functions in myriad ways, as a timeline of history, a horizon line, the line dividing water from land, the edge of a table, the top of a bridge, a topographical mark and a clothesline. From there, the book unfolds as a set of interlocking mini-essays on Steinberg’s favorite and recurring subjects: music and musicians, architecture, the chatter of socialites, the vanity of power and ambition, and the iconography of mid-century America . . . a critical book in Steinberg’s oeuvre, a turning point for the artist. Philip Kennicott, The Washington Post

"One of the towering creative forces of the 20th Century." —Françoise Mouly, art editor, The New Yorker

"For the six decades, [Steinberg’s] amazing work levitated this magazine; here was a major twentieth-century artist who also possessed an unmatched gift for the magazine page especially The New Yorker’s." —Ian Frazier, The New Yorker

"Is there any subject—or object, for that matter—that Saul Steinberg didn’t have at with his swordlike pen? Cartoonist-artist extraordinaire, he was a veritable Leonardo of graphic drollery." —Grace Glueck, The New York Times

"Steinberg certainly produced his share of classics, and in the process he helped pave the way for a culture of boundary-blurrers. . . . He showed that literature can be created without using a single sentence." —Deborah Solomon, The New York Times Book Review
or support indie stores by buying on
Copyright © 2020 American Booksellers Association