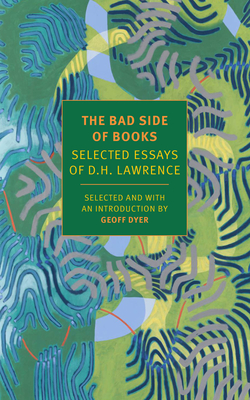 The Bad Side of Books

You could describe D.H. Lawrence as the great multi-instrumentalist among the great writers of the twentieth century. He was a brilliant, endlessly controversial novelist who transformed, for better and for worse, the way we write about sex and emotions; he was a wonderful poet; he was an essayist of burning curiosity, expansive lyricism, odd humor, and radical intelligence, equaled, perhaps, only by Virginia Woolf. Here Geoff Dyer, one of the finest essayists of our day, draws on the whole range of Lawrence’s published essays to reintroduce him to a new generation of readers for whom the essay has become an important genre. We get Lawrence the book reviewer, writing about Death in Venice and welcoming Ernest Hemingway; Lawrence the travel writer, in Mexico and New Mexico and Italy; Lawrence the memoirist, depicting his strange sometime-friend Maurice Magnus; Lawrence the restless inquirer into the possibilities of the novel, writing about the novel and morality and addressing the question of why the novel matters; and, finally, the Lawrence who meditates on birdsong or the death of a porcupine in the Rocky Mountains. Dyer’s selection of Lawrence’s essays is a wonderful introduction to a fundamental, dazzling writer.

Praise For The Bad Side of Books: Selected Essays of D.H. Lawrence…

"Lawrence’s work is as relevant to modern debates about speech and power as it was to the ones that fueled the notoriety in his lifetime.” —Lucas Iberico Lozada, Vanity Fair

"Let [Lawrence] travel, unleash him on a debauched person like Magnus, give him sense perceptions and concrete details to chew on—what happens is stunning . . . His sentences are so unbridled and fresh, and so weirdly perfect. Even when he chars a subject, reduces it to ash, the prose is still large and additional like a flame, wondrously rippling in the air.” —Zachary Fine, The Nation

“The Bad Side of Books contains essays about Thomas Mann and Ernest Hemingway, about Italian flowers and roadside crucifixes, about Cézanne and Van Gogh, about arriving in New Mexico and returning to England. Just about every time, Lawrence has interesting and original observations to make about his subject. . . . To read Lawrence observing something is to witness one of literature’s stunning wonders.” —Robert Minto, Los Angeles Review of Books

"Most of this material was new to me, and I enjoyed this book enormously." —Dwight Garner, The New York Times

"As Geoff Dyer stresses in his penetrating introduction, Lawrence ignores genre straitjackets as he blends travel writing, memoir, philosophical musings, storytelling and a novelist’s flair for portraiture and description. . . . No matter what he writes about, though, Lawrence generates—in language crackling with passion and conviction—an intensely reimagined experience. Jonathan Swift, when challenged, could produce a brilliant essay about a broomstick; Lawrence outdoes him in his tour-de-force 'Reflections on the Death of a Porcupine.’” —Michael Dirda, Washington Post

“[W]hy has the New York Review Books Classics imprint brought out a new edition of his selected essays? Because there’s much more to Lawrence’s work than his detractors care to admit. There is his complex and vivid philosophy, based on following one’s primal drives into a more sensual engagement with life and a more honest sense of self. And there is, above all, the lush beauty of his language, prose that has a pulse and gives off heat.” —Scott Beauchamp, Washington Examiner

“Lawrence is one of our true prophets, not only in his ‘madness for the unknown’ . . . but in his lifelong development of a technique, a fictional and poetic way in which the prophetic voice can be given formal expression.” —Joyce Carol Oates

“Geoff Dyer has selected some of [Lawrence's] most fascinating and accessible pieces to tempt new readers. . . . This is very much a volume for the general reader . . . Comedy and humour abound, as does a provocative honesty. . . . There are countless examples in this volume of Lawrence at his poetic best.” —Gerri Kimber, The Times Literary Supplement

“It is high time that Lawrence’s non-fiction had another airing. . . . For anyone who hasn’t read any Lawrence, I would readily recommend it as a good place to start. It presents Lawrence as diverse, brilliant, and strange. He was all these things. —Catherine Brown, Prospect Magazine

“[Lawrence] seems to bypass [art] and interpose nothing between the reader and the vision. . . . To read him is to feel oneself in contact with a personality that has broken through form and rhetoric and confronts one in a kind of nakedness.” —Anthony Burgess, Flame into Being: The Life and Work of D.H. Lawrence

“[Lawrence] had an extraordinary sensitiveness to what Wordsworth called ‘unknown modes of being.’ He was always intensely aware of the mystery of the world, and the mystery was always for him a numen, divine.” —Aldous Huxley

D.H. Lawrence (1885–1930), a novelist, storywriter, critic, poet, and painter, was one of the greatest figures in twentieth-century English literature. Among his many works are Sons and Lovers, The Rainbow, and Women in Love.

Geoff Dyer was born in Cheltenham, England. He is the author of four novels—Paris Trance, The Search, The Colour of Memory, and Jeff in Venice, Death in Varanasi—and several works of nonfiction, including Ways of Telling, But Beautiful: A Book About Jazz, and Yoga for People Who Can’t Be Bothered to Do It. He lives in Los Angeles, where he is a writer in residence at the University of Southern California.
Loading...
or support indie stores by buying on
(This book is on backorder)