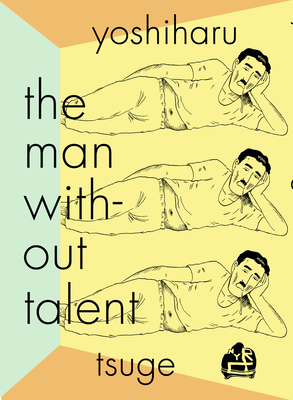 The Man Without Talent

A Japanese manga legend's autobiographical graphic novel about a struggling artist and the first full-length work by the great Yoshiharu Tsuge available in the English language.

Yoshiharu Tsuge is one of comics' most celebrated and influential artists, but his work has been almost entirely unavailable to English-speaking audiences. The Man Without Talent, his first book ever to be translated into English, is an unforgiving self-portrait of frustration. Swearing off cartooning as a profession, Tsuge takes on a series of unconventional jobs -- used camera salesman, ferryman, and stone collector -- hoping to find success among the hucksters, speculators, and deadbeats he does business with.

Instead, he fails again and again, unable to provide for his family, earning only their contempt and his own. The result is a dryly funny look at the pitfalls of the creative life, and an off-kilter portrait of modern Japan. Accompanied by an essay from translator Ryan Holmberg that discusses Tsuge's importance in comics and Japanese literature, The Man Without Talent is one of the great works of comics literature.

Praise For The Man Without Talent…

“While The Man Without Talent is by turns mysterious, philosophical and slapstick, it is also tender, capturing the moment-to-moment shift in emotions of a frustrated man who nevertheless loves his child. In a book about valuing the left behind, Tsuge shows us what is never actually at risk of being forsaken.” —Hilary Chute, The New York Times Book Review

"Tsuge’s quasi-autobiographical series of vignettes are a masterpiece of mundane struggle. . . . Every page feels lived and desperate, yet shot through with poetry.” —Publishers Weekly, starred review

"This fascinating collection presents a Japan of scruffy shops and quiet streets in which forgotten men tell strange stories.” —James Smart, The Guardian

”My most pleasurable reading experience of 2020 was Ryan Holmberg's translation of Yoshiharu Tsuge’s The Man Without Talent (NYRC). Holmberg's translated dialogue is full of vernacular poetry, which I imagine/hope is quite close to the experience of reading the Japanese version. It certainly fits Tsuge’s gorgeous cartooning, which is often unfussy and employed to effectively tell the story, but sometimes surprises with its soft and loving approximation of the Japanese countryside and shacks full of possessions . . . I haven't been able to recommend this book enough.” —Nicholas Burman, The Comic Journal

"[A] deeply philosophical parable about capitalism, art and beauty, and the pressures of modern life. . . . It is easy to see from this book how Tsuge has become one of Japan’s most celebrated gekiga (“dramatic pictures”) artists." —Ella Bucknall, The Times Literary Supplement

“Success is only in the past, for Sukezō and his acquaintances, and the melancholy, mediative tone persists to the end. Beautifully drawn and shaded, frequently matched with poetic writing, this is an exceptional introduction to a master cartoonist.” —Pete Redrup, The Quietus

“[A] semi-autobiographical story that follows a former mangaka as he tries to find new, bizarre ways of providing for his family. . . . Tsuge highlights the struggle between soul-sucking, banal poverty and the desire to lead a simple, peaceful life. . . . The Man Without Talent allows the author and the reader to explore the fantasy of leading a contemplative life; but where other authors would laud such a lifestyle, Tsuge is bitterly honest about how such a lack of responsibility affects those around his protagonist while simultaneously proposing that there are too many demands in modern society.” —Morgana Santilli, Comics Beat

“With its depiction of life in a liminal space at the point where an economic system is decaying, there probably wasn't a more timely reprint all year. Holmberg's translated dialogue is full of vernacular poetry, which I imagine/hope is quite close to the experience of reading the Japanese version. It certainly fits Tsuge’s gorgeous cartooning, which is often unfussy and employed to effectively tell the story, but sometimes surprises with its soft and loving approximation of the Japanese countryside and shacks full of possessions.” —The Comics Journal “The Best Comics of 2020”

Yoshiharu Tsuge is a cartoonist and essayist known best for his surrealistic, avant-garde work. Tsuge began drawing comics in 1955, working primarily in the rental comics industry that was popular in impoverished post-war Japan. In the 1960s, Tsuge was discovered by the publishers of the avante garde comics magazine Garo and he gained increasing recognition for his surrealistic and introspective work. He withdrew from Garo in the 1970s and his work became more autobiographical. Tsuge has not published cartoons since the late 1980s, elevating him to cult status in Japan. He lives in Tokyo.

Ryan Holmberg is an arts and comics historian. He has taught at the University of Chicago, CUNY, the University of Southern California, and Duke University, is a frequent contributor to Art in America, Artforum, Yishu, and The Comics Journal, and has edited and translated books by Seiichi Hayashi, Osamu Tezuka, Sasaki Maki, and others.