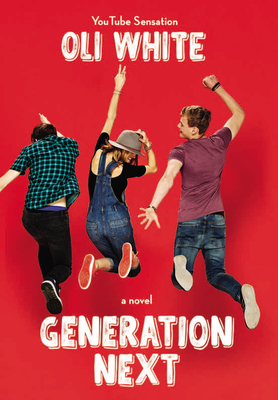 Things haven't been easy for Jack recently - life as a teenager has its ups and downs. But when he meets a new group of friends, who are every bit as geek as they are chic, his luck seems to be changing. Each of the group is talented and when they pool together to create Generation Next, an incredible new kind of social media platform, it's clear that they're on to something special.

What if your Instagram account grew by hundreds of thousands of followers overnight, and big companies were fighting each other to offer you photoshoots? When GenNext suddenly goes viral, Jack and his friends are thrust into a crazy world of fame which is as terrifying as it is awesome.

Because someone out there is determined to trip Jack up at every step. If he doesn't stop them, soon everyone he cares about - his friends, his family, and the girl he's falling for - will be in danger...

Oli White is a 21-year-old British vlogger who creates quirky comedy entertainment videos, ranging in content from celebrity interviews and challenges to collaborations with fellow vloggers. Oli started making videos in 2012 and his vlogs across his three YouTube channels, OliWhiteTV, OliWhiteVlogs and OliWhiteGames, are watched by millions of viewers every month. Originally from Hertfordshire, Oli now lives in London.

Praise For Generation Next…

"Although I am a fan of [Oli White's] videos, I had doubts about whether his book would be popular simply because of his fame. I no longer doubt his literary talent. He was able to incorporate his comedic persona into the plot, making it light and fun, and his YouTube personality was evident in his writing style. Generation Next is an easy but exciting read. It is mature, funny and romantic all at once."—Santa Fe, New Mexican
or
Not Currently Available for Direct Purchase
Copyright © 2020 American Booksellers Association