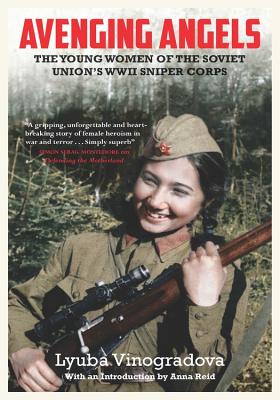 A gripping account of the Soviet female sniper corps of WWII
Beginning in 1942, with the Eastern Front having claimed the lives of several million Soviet soldiers, Stalin's Red Army began drafting tens of thousands of women, most of them in their teens or early twenties, to defend against the Nazi invasion. Some volunteered, but most were given no choice, in particular about whether to become a sniper or to fill some other combat role.

After a few months of brutal training, the female snipers were issued with high-powered rifles and sent to the front. Almost without exception, their first kill came as a great shock, and changed them forever. But as the number of kills grew, many snipers became addicted to their new profession, some to the point of becoming depressed if a "hunt" proved fruitless.

Accounts from the veterans of the female sniper corps include vivid descriptions of the close bonds they formed with their fellow soldiers, but also the many hardships and deprivations they faced: days and days in a trench without enough food, water, or rest, their lives constantly at risk from the enemy and from the cold; burying their friends, most of them yet to leave their teenage years; or the frequent sexual harassment by male officers.

Although many of these young women were killed, often on their first day of combat, the majority returned from the front, only to face the usual constellation of trials with which every war veteran is familiar. Some continued their studies, but most were forced to work, even as they also started families or struggled to adjust to life as single parents. Nearly all of them were still in their early twenties, and despite the physical and mental scars left by the war, they had no time for complaints as the Soviet Union rebuilt following the war.

Drawing on original interviews, diaries, and previously unpublished archival material, historian Lyuba Vinogradova has produced an unparalleled quilt of first-person narratives about these women's lives. This fascinating document brings the realities and hardships faced by the Red Army's female sniper corps to life, shedding light on a little-known aspect of the Soviet Union's struggles against Hitler's war machine.

Dr. Lyuba Vinogradova was born in Moscow in 1973. After graduating from the Moscow Agricultural Academy with a PhD in microbiology, she took a second degree in foreign languages. In 1995 she was introduced to Antony Beevor and helped him research Stalingrad. Since then she has worked on many other research projects, and is the co-author (together with Beevor) of A Writer at War: Vasily Grossman with the Red Army.

Arch Tait has translated 17 books, 35 short stories and 30 articles by most of the leading Russian writers of today, notably the work of the late Anna Politkovskaya.

"[Avenging Angels] is an interesting story, the subjects of which deserve to have their story told before they pass from the scene. They certainly set an example for American women who only recently were permitted to serve in combat roles."
— New York Journal of Books


"Avenging Angels details the incredible story of Russia's female sniper brigades, from the harsh training and hard living they endured to the myriad accomplishments, medals, and triumphs that they won with guile, skill, and dedication...war has rarely felt so visceral, so dirty and desperate, cold and suffocating, as it does in these pages."
—Seattle Book Review


Praise for Defending the Motherland
"A gripping, unforgettable and heartbreaking story of female heroism in war and terror . . . Simply superb."
—Simon Sebag Montefiore

"The story of the Soviet air women is well told by Lyuba Vinogradova...[her research] shines through the pen portraits of the aviators and the vivid descriptions of the aerial battles."
—Literary Review


"Even after the tide had turned on the Eastern Front, these [Soviet] women continued to 'hunt' the Germans and keep them on the run, all the way to Berlin. They served on many different parts of the front from the Baltics to the Ukraine and were eventually awarded many medals and decorations as their tallies mounted. . . . an interesting story, the subjects of which deserve to have their stories told."—Thomas McClung, New York Journal of Books

"Here are the flyers who rose to the defense of Russia during the Second World War: women who cut off their plaits, made lipstick from ground-up pencils and wax and soared through the air as bravely as any man."
—The New Statesman


"Lyuba Vinogradova might be one of the most successful historians you have never heard of...having learnt from some of the best, she has now stepped into the light with her own book: an acclaimed history of Russian female fighter and bomber pilots in the Second World War."
—The Sunday Times


"[Defending the Motherland] is diligent scholarship and compelling biography. Too often the impact of war stories is diluted by exaggeration, but not here. The reality lived by Raskova's women pilots was extraordinary enough."
—The Times


"Marina Raskova's motto was 'We can do anything!' The women of her regiments certainly fulfilled her faith. Not for the first time, one can't help being flabbergasted by the heroic achievements of the poverty stricken and hounded peoples of the USSR. Imagine what Russia would be capable of with a reasonable government!"
—The Spectator


"We're still having a debate in this country about whether women should be allowed to fight alongside men in combat, but the matter ought to have been settled 70 years ago in Russia. Vinogradova's engrossing book charts the history of a heroic group of female Soviet pilots who displayed courage and skill in taking on the Luftwaffe."
—The Mail on Sunday


"Lyuba Vinogradova has written an impressive book, and drawing on letters, diaries and interviews with doughty survivors, she has woven a powerful and moving account of a people at war and of women rising up to take arms, free their country - and, paradoxically, assert their common humanity."—Irish Independent
or
Not Currently Available for Direct Purchase
Copyright © 2020 American Booksellers Association