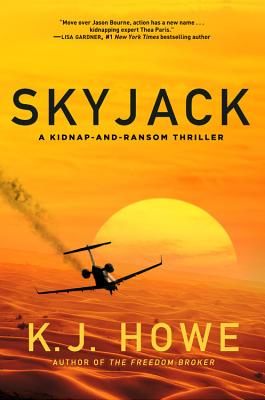 "ACTION-PACKED THRILL RIDE." --KARIN SLAUGHTER
"SENSATIONAL." --LEE CHILD
"HIGH STAKES, UP-TO-THE-MINUTE REALISM, AND NONSTOP ACTION." --KAREN DIONNE
In the follow-up to her exhilarating debut, The Freedom Broker, K.J. Howe delivers a "riveting" and "rip-roaring" thriller perfect for fans of Sandra Brown and Lisa Gardner.
International kidnap expert Thea Paris is escorting two former child soldiers on a plane from an orphanage in Kanzi, Africa, to adoptive parents in London when the Boeing Business Jet is hijacked and forced to make an emergency landing in the remote Libyan desert.
When the dust settles on a tense negotiation, Thea finds herself at the beck and call of a ruthless criminal who will stop at nothing to crush his rivals, even if it means forcing her to break international law.

Revealing a deadly conspiracy that connects the dark postwar legacy of World War II to the present, this case will bring all parties to an explosive conclusion that will decide the fate of millions across Europe and the Middle East.

Praise For Skyjack: a full-throttle hijacking thriller that never slows down (A Thea Paris Novel #2)…

"In Thea Paris's latest adventure . . . the main story line excels, [but] a subplot involving a young teen with a horrible father adds further tension to the suspenseful narrative. Howe, executive director of ThrillerFest, is a master storyteller, and even though this is her second novel, it demonstrates the talent of someone who has been crafting thrillers for decades."
—Jeff Ayers, Library Journal (Starred Review)

"Thea Paris kicks some serious ass in this action-packed thrill ride that grabs the reader from the first exciting page and doesn't let go until the last. K.J. Howe is at the top of the K&R game."
—Karin Slaughter, internationally bestselling author of The Good Daughter

"Readers will be thrilled to journey with Thea, Rif, and the rest of the Quantum team again, as the author offers page after page of breathtaking action and a complex conspiracy plot that leads to a stunning end."
—Mary Lignor, Suspense Magazine

"Featuring the return of international kidnap expert Thea Paris, Howe's latest puts Thea up against enemies both old and new while sorting through the morass associated with the hijacking of a jet on which she was a passenger . . . Skyjack is a supremely effective effort, relentless in its approach and riveting in its execution."
—Jon Land, Providence Journal

"K.J. Howe proves she owns a subgenre that has long been neglected--the women's adventure mystery--in her second novel about kidnapping and rescue expert Thea Paris. Skyjack soars with a powerful plot, realistic characters, and action that is, at times, over-the-top but always believable."
—Oline Cogdill, South Florida Sun Sentinel

"[A] spine-tingling thriller. K.J. Howe molds a tale that completely absorbs the reader . . . Excellent on every level."
—San Francisco Review of Books

"Howe is so committed to her story and skillful in its execution that the suspense scenes, especially when Paris's group attempts to close in on the terrorists amid a crowd of tourists, are difficult to turn away from. And when Paris has to singlehandedly battle a hangarful of thugs, the action is so exhilarating that we wish the scene would go on longer. For action-hungry readers, this one's a must!"
—Booklist

"Hang on tight: Thea Paris is back in a new nailbiting, high-stakes adventure. Skyjack is exciting, assured, and a hell of a great ride. Buckle up."
—Meg Gardiner, author of Into the Black Nowhere

"K.J. Howe's Skyjack upends the thriller world with Thea Paris, a fresh, engaging, smart, compassionate, deadly heroine who first appeared in The Freedom Broker and seems destined for many more compelling novels to come. I don't know what impresses me more--the accuracy of the action details (the result of thorough, intensive research), the global sweep of the story, or the underlying theme, which is the hazards, rewards, and complexity of family. As a private pilot, I was particularly taken by the airplane sequences, which are extremely accurate. This is all the more remarkable because K.J. Howe is not a pilot."
—David Morrell, New York Times bestselling author of Murder as a Fine Art

"Thea Paris is the female James Bond. K.J. Howe is today's hottest author. Compelling and crafty, Skyjack is brilliantly plotted to the point where you feel the turbulence as you turn the pages."
—A.J. Tata, bestselling author of Direct Fire

"Fans of Jack Clancy and Brad Thor can rejoice: there is a new literary giant in the land! K.J. Howe is the real deal. Deeply experienced and informed in her own right, she has applied her knowledge, her personal experiences, and her amazing writing skills to give us Skyjack, a book filled with all the action and suspense that any reader could desire! From a US Air Force B-47 in the 1950s to a gunfight in the Hagia Sophia, Howe writes with authority and detail that is intensely satisfying to any reader."
—Lt. Col. Dave Grossman, author of On Killing, On Combat, and Assassination Generation

"The Freedom Broker was no fluke. With Skyjack, Howe shows she is the real deal. An honest-to-God, first-class thriller writer who will have your knuckles turning white as you flip the pages."—Linwood Barclay, #1 internationally bestselling author

"K.J. Howe's Skyjack is a rip-roaring adventure from first page to last. The novel's thrilling blend of scientific plausibility, riveting spycraft, and ripped-from-the-headlines authenticity left me in awe. And the hero of this nail-biter, Thea Paris, is a Swiss Army knife of ingenuity, smarts, and skills. I want her to be my new best friend, or at least to be there if I'm ever in harm's way. I can't wait to see what trouble she gets into next!"
—James Rollins, New York Times bestselling author of The Demon Crown

"Thea Paris has returned in Skyjack, a pulse-pounding treat, sharp as a piece of Damascus steel. If you're not reading K.J. Howe, you're missing out."
—Steve Berry, New York Times bestselling author of The Bishop's Pawn

"This action-packed book is pure excitement, tracking Thea Paris as she unravels a mysterious genocidal plot. Exotic locations, intricate plot twists, and rich characters make this a page-turning thriller you will not want to miss. I found myself eager to read the next chapter, and then the next, to discover how the unfolding challenges would be addressed. Thea Paris is a wonderful character, smart, tough, and always thinking several moves ahead, an intriguing protagonist that I want to read more and more about. Pick up, strap in, and prepare for an action-packed journey."
—Gary Noesner, former chief of the FBI Crisis Negotiation Unit and author of Stalling for Time: My Life as an FBI Hostage Negotiator

"Looking for your next high-octane, jet-setting, ass-kicking, female-driven thriller? Then look no further."
—LitHub

"After stunning readers with her hard-hitting debut, The Freedom Broker, author K.J. Howe tops herself with Skyjack, a gripping new novel that brings back K&R specialist Thea Paris. Think Under Siege meets Angels and Demons, with a few extra helpings of nonstop action for good measure."
—The Real Book Spy, Best Books of 2018 List

Praise for The Freedom Broker
"This debut novel generates nonstop suspense, commanding attention from the start and never letting go. Intended as the start of a series, this is a must for thriller fans."—Booklist (Starred Review)

"Move over Jason Bourne, action has a new name as international kidnapping expert Thea Paris pulls out all the stops to rescue her own father in this clever and gritty debut."
—Lisa Gardner, #1 New York Times bestselling author of Find Her

"With an alpha female heroine and a plot that's smart, detailed, and highly engaging, The Freedom Broker introduces a new name to the thriller genre: K.J. Howe. It's a fantastic debut . . . a pulse-pounding treat for anyone who loves action and adventure."—Steve Berry, New York Times bestselling author of The Patriot Threat

"The pulse-pounding excitement never ends in this remarkable debut novel . . . From Africa's violent backcountry to cosmopolitan Athens and the corridors of power in Washington D.C., Howe takes the reader on the thriller ride of a lifetime. All of kidnap negotiator Thea Paris's skills are tested when she has to save a billionaire who is also someone she loves. Memorable characters, muscular prose, and a world atlas of fascinating insider details make this a can't-put-down read. I loved it!"
—Gayle Lynds, New York Times bestselling author of The Assassins

"Unrelentingly entertaining and impossible to put down, The Freedom Broker boasts the ferociously savvy, serious as hell Thea Paris, who brilliantly plots and fearlessly fights to rescue her kidnapped father from the clutches of expert, deadly opponents."—Karin Slaughter, Internationally Bestselling Author of The Kept Woman

"K.J. Howe's debut novel is a high-stakes geopolitical thriller that is truly a page turner. The Freedom Broker explores and illuminates the exotic world of elite Delta Force-type professionals who make a dangerous and deadly living rescuing kidnap victims all over the world. And we are along for the ride of our lives. Incredibly well-researched and expertly written, this is a behind-the-scenes story of how some hostage victims come home safely and why some do not."—Nelson DeMille, #1 New York Times bestselling author of The Panther

"In a genre that predominantly features alpha male characters, K.J. Howe re-writes the rulebook by making her protagonist a strong female operative with a medical condition, adding realism without sacrificing any of the action. Thea Paris can throw down with the very best the genre has to offer, and so can Howe."
—The Real Book Spy

K.J. Howe is the executive director of ThrillerFest, the annual conference of International Thriller Writers. A three-time Daphne du Maurier Award winner, she completed her MA in Writing Popular Fiction at Seton Hill University. She is an avid traveler who has raced camels in Jordan, surfed in Hawaii, and dove with the great whites in South Africa. She became fascinated by the kidnap-and-ransom (K&R) world after meeting Peter Moore, a British computer consultant who became the longest-held hostage in Iraq and the only person to survive of the five men who were taken that day. She is the author of The Freedom Broker.
Loading...
or
Not Currently Available for Direct Purchase