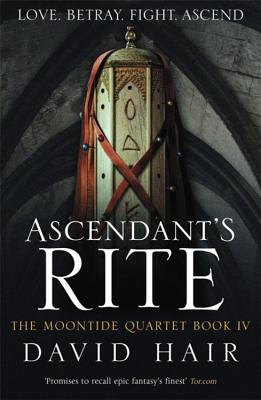 The last few months of the moontide - when the bridge connecting East and West rises above the sea - has come, and in the West Emperor Constant prepares the final phase of his plan to conquer the East.

For failed mage Alaron and his companion Ramita - widow to the mage who built the Leviathan Bridge - the unthinkable has happened. They have lost the Scytale of Corineus, the key to the Rite of Ascendancy, as well as one of Ramita's infant sons, to the hands of their deadliest enemies.

In Javon, Cera Nesti, the imprisoned queen, has been freed, and plots to take on the overwhelming might of the Rondian Empire. But standing between her and her goal is a band of deadly mercenaries playing a dangerous game of their own.

And in the East, Seth Korion's Lost Legions must navigate treacherous roads to gain safety, bearing secrets that could bring down the Emperor.

The time has come for the Rite of Ascendancy to be performed. New powers must rise to save or damn Urte, and on the mighty Leviathan Bridge itself, all will be decided.

David Hair is an award-winning writer of fantasy for adult and YA readers. He was born in New Zealand and travelled widely, and after spending time in Britain, then India, he now lives in Auckland, New Zealand, with his wife. His epic fantasy saga The Moontide Quartet and his YA series The Return of Ravana, are published by Jo Fletcher Books.

Praise for The Moontide Quartet
"A mashup of J.R.R. Tolkien and Henry Kissinger... Hair capably spins a rather elaborate storyline, or better multiple storylines, all suitably tangled, given the conspiracies and mind-scramblings that are afoot... the reader will want to keep plenty of gnostic energy on hand...fans of the series will be eager to see what comes next."

"Hair takes his time with all these narrative arcs, allowing the characters lots of space within which to grow. Depth of character was a strong point in Mage's Blood and it is here as well. Many of the characters are realistically complex, few remain the same by the end of the novel, and many are thrown into situations that either reveal or create different facets of their personality."

"I love the depth of Hair's magic system, as well as the wide variety of his characters...We've got two more books left in David Hair's world, and I can't wait to see what he's got up his sleeves next."