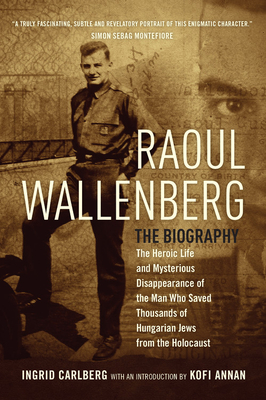 An honorary citizen of the United States and Canada, and designated as one of the Righteous Among the Nations by Israel, Raoul Wallenberg was a modest envoy to Hungary whose heroism in Budapest at the height of the Holocaust saved countless Jewish lives, and ultimately cost him his own.

A series of unlikely coincidences led to the appointment of Wallenberg, by trade a poultry importer, as Sweden's Special Envoy to Budapest in 1944. With remarkable bravery, Wallenberg created a system of protective passports, and sheltered thousands of desperate Jews in buildings he claimed were Swedish libraries and research institutes. As the war drew to a close, his invaluable work almost complete, Wallenberg voluntarily went to meet with the Soviet troops who were relieving the city. Arrested as a spy, Wallenberg disappeared into the depths of the Soviet system, never to be seen again.

In this definitive biography, noted journalist Ingrid Carlberg has carried out unprecedented research into all elements of Wallenberg's life, narrating with vigor and insight the story of a heroic life, and navigating with wisdom and sensitivity the truth about his disappearance and death.

Praise For Raoul Wallenberg: The Heroic Life and Mysterious Disappearance of the Man Who Saved Thousands of Hungarian Jews from the Holocaust…

"A truly fascinating, subtle and revelatory portrait of this enigmatic character and perhaps the closest any historian has got to the real man and the truth of his fate."—Simon Sebag Montefiore, award-winning author of Jerusalem, A The Biography


"Carlberg portrays one of the most fascinating human lives of the
twentieth century, with devotion to every detail. Her research is
overwhelming."—Dagens Nyheter (Sweden)


"A fascinating and detailed portrait of the man Raoul Wallenberg, and as
close as possible to the truth about what happened to him."—Journalisten (Sweden)


"Authoritative and comprehensive . . . the story of an unexceptional young man who briefly made an exceptional contribution towards the redemption of a continent for its historic failure."—Max Hastings, The Sunday Times

"Investigative journalist Ingrid Carlberg's biography of Raoul Wallenberg...follows quite closely on the heels of that by historian Bengt Jangfeldt. Carlberg's approach is altogether more forensic and she has unearthed a staggering amount of detail. At last, we are made to understand the full reasons why the courageous Swede was arrested in January 1945."—The Jewish Chronicle


"Ingrid Carlberg's superb biography will doubtless be regarded as the standard work on Wallenberg. Richly detailed and thoroughly researched, it is an important book that helps us gain a new understanding of Budapest in 1944 . . . A brisk and atmospheric read that brings to life an extraordinary story of resistance and bravery during Europe's darkest hours."
—Adam Lebor, Literary Review


"Carlberg details not only the tale of Raoul Wallenberg's bold rescue of 100,000 Jews and his subsequent disappearance during World War II - but also the story of how international governments for decades ignored pleas to rescue the Swedish businessman and diplomat."—New York Post, Must Reads


"Carlberg's life of the man is the most complete and winningly empathetic yet to appear in English, an absorbing portrait of an ordinary man who rose to the occasion of doing extraordinary things. . .Carlberg's biography stands as one of the most eloquent of the many thousands of tributes large and small that have been paid to the memory of Raoul Wallenberg since his disappearance."
—Christian Science Monitor, Best Books of March


"Carlberg captures not just the factual complexity but also the emotions involved in this troubling, tragic story."
—Forward

"In her excellent biography, Carlberg excavates the details of Wallenberg's end, but she also digs deeply into the story of his life--shedding light upon a time that is often eclipsed by all that came after. It's a time which is essential to any understanding of the man Wallenberg was, the course he pursued, and the hero he's remembered as."
—New Books Network


"Swedish journalist Ingrid Carlberg has written the most comprehensive biography of her countryman Wallenberg that we are ever likely to get . . . Told here is the end of World War II, the dawn of the Cold War, and the story of how a hero of one war got caught in the slow machinery of the next."—The American Conservative

Ingrid Carlberg is a Swedish author and journalist. Her book about the life and fate of Raoul Wallenberg was awarded the prestigious August Prize for nonfiction. The book also received the Swedish Academy's Axel Hirsch Prize, for a "biography of considerable artistic and cultural merit."

Carlberg worked at the Swedish daily newspaper Dagens Nyheter from 1990 to 2010, as an investigative and features journalist. She has an honorary doctorate at Uppsala University, awarded for her book The Pill: A Tale of Doctors and Depression, Freud and Researchers, People and Markets, about the history of antidepressants. The Pill won three awards, including the Guldspaden for the best work of investigative journalism, and was nominated for the August Prize.
Loading...
or
Not Currently Available for Direct Purchase