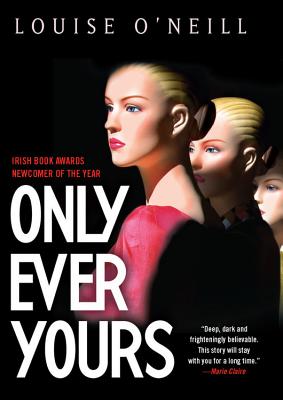 Where women are created for the pleasure of men, beauty is the first duty of every girl. In Louise O'Neill's world of Only Every Yours women are no longer born naturally, girls (called "eves") are raised in Schools and trained in the arts of pleasing men until they come of age. freida and isabel are best friends. Now, aged sixteen and in their final year, they expect to be selected as companions--wives to powerful men. All they have to do is ensure they stay in the top ten beautiful girls in their year. The alternatives--life as a concubine, or a chastity (teaching endless generations of girls)--are too horrible to contemplate.
But as the intensity of final year takes hold, the pressure to be perfect mounts. isabel starts to self-destruct, putting her beauty--her only asset--in peril. And then into this sealed female environment, the boys arrive, eager to choose a bride. freida must fight for her future--even if it means betraying the only friend, the only love, she has ever known.

Praise For Only Ever Yours…

"A haunting dystopian novel for fans of The Handmaid's Tale"—Refinery29

"A dark dream. A vivid nightmare. The world O'Neill imagines is frightening because it could come true. She writes with a scalpel."
—Jeanette Winterson

"[A] terrifying but captivating book."—Company magazine

"Disturbing, provocative . . . I was utterly captivated from beginning to end."—Gabriel Byrne ("In Treatment," "The Usual Suspects," "Miller's Crossing)

"Dark and thought-provoking... There are some good Logan's Run shivers, and it is beautifully written."—Tara Flynn, The Irish Times

"Only Ever Yours is a chilling dystopian fantasy... It has the bleakness of Catcher in the Rye, the satire of The Stepford Wives and it made me recall how scared I felt reading Nineteen Eighty-Four... But by far the best thing about Louise O' Neill's book is that it is well written, by a fresh and original talent."—Anne Cunningham, Irish Independent

"Compelling writing and a brutal conclusion means this only-too-real dystopia grips from beginning to end."—SFX Magazine

"O'Neill has talent to burn; this dystopian YA debut is both compelling and frightening."—Irish Examiner

"If the Hunger Games series was your guilty pleasure then young Irish author Louise O' Neill's debut novel Only Ever Yours is about to become another... [It] explores the contemporary pressure on women and girls to be 'perfect' in this dark and gripping narrative."—Irish Tatler

"Deep, dark and frighteningly believable. This story will stay with you for a long time."—Marie Claire

"A witty and unsettling story...Hopefully Only Ever Yours will be read widely."—The Telegraph

"Unbelievably believable, compelling, utterly riveting... Whilst it is dark, uncompromising and utterly daunting to read as a woman, it is and should be a classic in the making."—Liz Loves Books

"O'Neill's story reads like an heir to Margaret Atwood's The Handmaid's Tale and M.T. Anderson's Feed, and, like those books, it's sure to be discussed for years to come."—Publishers Weekly, starred review

"A beautifully written, remarkable debut. the near-future world, after a climate-change apocalypse, is fully imagined and vividly realized. The claustrophobic, insular lives of 16-year-old girls as they struggle against themselves and each other will ring eerily true for today's teens." - Common Sense Media

Louise O'Neill was born in west Cork in 1985. She studied English at Trinity College Dublin and has worked for the senior Style Director of American Elle magazine. While in New York, she also worked as an assistant stylist on a number of high-profile campaigns. She is currently working as a freelance journalist for a variety of Irish national newspapers and magazines, covering feminist issues, fashion and pop culture.
Loading...
or
Not Currently Available for Direct Purchase