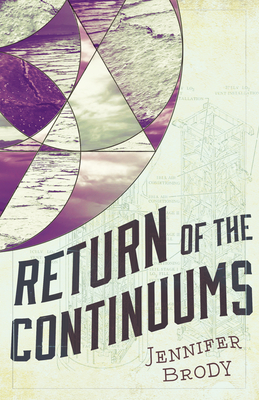 Return of the Continuums (Hardcover)

Praise for Return of the Continuums

"Strong female and male characters join forces to save what's left of the world, while a subplot of love triangles adds emotional suspense. Classic themes of loyalty in the face of adversity and good vs. evil underpin this plot-driven science fiction adventure. Although this is the second volume of a trilogy, enough backstory is included to allow teens to pick it up without having read the first installment. Fans of The 13th Continuum will not be disappointed with this lively sequel." - School Library Journal

"Likeable characters, an intricate world, and imaginative settings combine to make a satisfying young-adult read in Jennifer Brody's Return of the Continuums, the second book of the dystopian Continuum series." - Foreword Reviews

"The pacing and action are noticeably stepped up in this second outing ...] will please fans of the first." Kirkus

"The follow up novel to The 13th Continuum is nothing less than a home run for author Jennifer Brody. It builds on a fully realized universe, dense with an ingenious mythology, from book one, yet manages to take readers to a whole new world (pun intended ). Be ready to be angry at the ending, though, because it's going to leave you clamoring for the final chapter in The Continuum Trilogy "--Kirby Howell, author of Autumn in the City of Angels

"Return of the Continuums is a riveting, action-packed sequel that kept me up well past my bedtime needing to know how Myra and her friends would survive the dangers of the surface and reach The First Continuum. With plenty of unfolding secrets and an ever-expanding world, this is a series that just gets better and better." - Stephanie Diaz, author of the Extraction series

Praise for The 13th Continuum

"Brody writes an intelligent narrative that is entertaining as it is introspective about the human race, its fate and where we might end up."-Roanoke Times

"Fans clamoring for a new dystopian science fiction series may appreciate this latest addition to the genre." - School Library Journal

"This gripping read is recommended not only for advanced teen readers, but for adults who enjoy solid sci-fi dystopian settings." - Donovan's Bookshelf

"A fascinating premise and compulsively readable debut. It totally sucked me in." --Robin Talley, author of Lies We Tell Ourselves

"With meticulous world-building and an epic scope, Jennifer Brody has created a fascinating sci-fi story. Readers will flip the pages, anxious to answer a question that will determine the future of humanity: Will they reach the surface? --Pintip Dunn, author of Forget Tomorrow

"The 13th Continuum manages to be smart, surprising, and a good time, all at once. That's hard magic to pull off, but Jennifer Brody makes it seem easy. Swift and surprising, this novel is such a confident debut. Here's to many more."--Victor LaValle, author of New York Times Notable Book of the Year, The Devil in Silver

Jennifer Brody lives and writes in Los Angeles. After graduating from Harvard University, she began her career in feature film development. Highlights include working at New Line Cinema on many projects, including The Lord of the Rings trilogy, The Golden Compass, and Love In The Time of Cholera. She's a member of the Science Fiction and Fantasy Writers of America. She also founded and runs BookPod, a social media platform for authors with hundreds of members. This is her first book.
or support indie stores by buying on
Copyright © 2020 American Booksellers Association