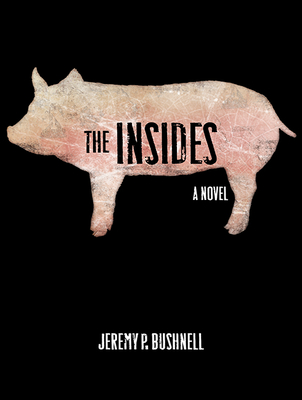 “With wildly inventive ideas, compelling suspense, and surprising emotional depth, The Insides captured my attention and imagination right from the start. Bushnell is a playful and adventurous writer, coloring outside the lines of genre, breaking the real world open and building his own between the cracks. In a feat of literary street magic, he blends the ordinary and the surreal together into a harmony that feels perfectly right and true even as it disorients the senses The result is a quirky paradox of a novel: fierce yet tender, lighthearted yet severe, weird yet natural.”
— Jason Foose (W), Changing Hands Bookstore, Tempe, AZ
View the List

Ollie Krueger's days as a punk kid practicing street magic are mostly behind her. Now she's a butcher at Carnage, a high end restaurant offering deconstructed takes on meat, and on the busiest nights of the week she and her partner, Guychardson, race to see who can produce more finished cuts. Ollie's the better butcher, but somehow Guychardson almost always wins. And Ollie thinks maybe it's because the mysterious knife he uses is magic. Before she knows it, Ollie's interest in the knife has thrown her square in the path of a dangerous ex-marine called "Pig" and his hired psychic, Maja, who are on the hunt for the knife too-who want it so badly, in fact, that they might kill for it. Now, magic is back in Ollie's life and she's being chased through New York City, with the fabric of space-time tattering around her and weird inter dimensional worms squirming their way into her kitchen. And before all this is over she's going to need to face up to the possible consequences of some bad decisions, to look at the uncomfortable truths that she stuffed away long ago, deep down inside . . .

Jeremy P. Bushnellis the author of"The Weirdness." He teaches writing at Northeastern University in Boston and lives in Dedham, Massachusetts."
Loading...
or
Not Currently Available for Direct Purchase