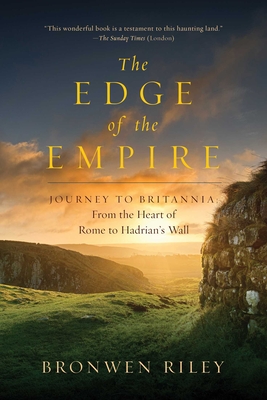 The Edge of the Empire (Hardcover)

A Journey to Britannia: From the Heart of Rome to Hadrian's Wall

An epic narrative journey from Rome to Hadrian's Wall—in the empire's northwestern frontier—brings vividly to life the colors, smells, sounds, and sensations of travel in the second century.

AD 130. Rome is the dazzling heart of a vast empire and Hadrian its most complex and compelling ruler. Faraway Britannia is one of the Romans' most troublesome provinces: here the sun is seldom seen and "the atmosphere in the country is always gloomy."

What awaits the traveller to Britannia? How will you get there? What do you need to pack? What language will you speak? How does London compare to Rome? Are there any tourist attractions? And what dangers lurk behind Hadrian's new Wall?

Combining an extensive range of Greek and Latin sources with a sound understanding of archaeology, Bronwen Riley describes an epic journey from Rome to Hadrian’s Wall at the empire's northwestern frontier. In this strikingly original history of Roman Britain, she evokes the smells, sounds, colors, and sensations of life in the second century.

Bronwen Riley is the head of guidebooks at English Heritage. She studied Classics at Oxford and then Byzantine Art at the Courtauld Institute. She lives in England.

Praise For The Edge of the Empire: A Journey to Britannia: From the Heart of Rome to Hadrian's Wall…

"A delightful trip from Rome to Hadrian's Wall—in C.E. 130. Great fun for anyone with even a slight knowledge of Roman and English history and geography—or those curious about them."
— Kirkus Reviews (starred)

"Erudite and fascinating. Dear reader, if you live like me in some long liberated colony of one or the other, consult this fascinating volume for a guide not merely to its physical relics but to its meanings and its attitudes, which may perhaps be your own. If not, read the book anyway to find what your destiny has missed."
— Jan Morris

"This wonderful book is a testament to this haunting land."
— The Sunday Times

"Head off on an epic journey across the Roman Empire in this entertaining read. Bronwen Riley is a warm and insightful guide to the sights, sounds, artifacts and people you encounter along the way."
— History Revealed

"An artful combination of history, archeology, and the imagination."
— Mary Beard