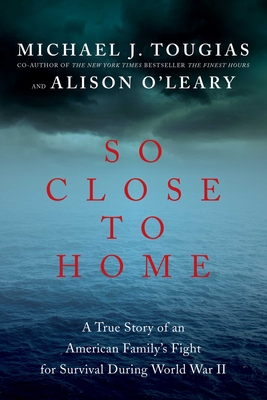 So Close to Home

A true story of men and women pitted against the sea during World War II—and an unforgettable portrait of the determination of the human spirit.

On May 19, 1942 a U-boat in the Gulf of Mexico stalked its prey fifty miles away from New Orleans. Captained by 29-year-old Iron Cross and King's Cross recipient Erich Wurdemann, the submarine set its sights on the freighter Heredia with fifty-nine souls on board.

Most of the crew were merchant seamen, but there were also a handful of civilians, including the Downs family, consisting of the parents, Ray Sr. and Ina, along with their two children, eight-year-old Ray Jr., nick-named “Sonny,” and eleven-year-old Lucille.

Fast asleep in their berths, the Downs family had no notice that two torpedoes were heading their way. When the ship exploded, Ina and Lucille became separated from Ray Sr. and Sonny.

An inspiring historical narrative, So Close to Home tells the story of the Downs family as they struggle against sharks, hypothermia, drowning, and dehydration in their effort to survive the aftermath of this deadly attack off the American coast.

Praise For So Close to Home: A True Story of an American Family's Fight for Survival During World War II…

"Through their meticulous research, Tougias and O'Leary take you where few historians dare, into the dark sea where an American family is floundering to stay alive, and onto the steel-planked deck of the German U-boat that put them there. This is priceless history—two hundred pages of 'you-are-there.'"
— Adam Makos, New York Times bestselling author of "A Higher Call"

"They don't come any better than Michael J. Tougias. His latest, So Close to Home, is a truly gripping, deeply affecting saga of undersea warfare and an extraordinary American family caught in the crosshairs of history."
— Alex Kershaw, New York Times best-selling author of "The Longest Winter" and "The Few"

"Gives a solid perspective of the hardships endured by ordinary people."
— Library Journal

"A little-known story — told from multiple points of view — about how World War II got a lot closer than most people think."
— New York Post

"A harrowing adventure story at sea, a surprising recovery of frightening historical material that had been shrouded in obscurity, and an unexpected, humanizing look at the enemies—the U-boat commanders—who turn out to be quite different from the conventional Nazi monsters of most WWII representation."
— Washington Independent Review of Books

Michael Tougias is the author and co-author of twenty-three non-fiction books, including several true survival-at-sea adventures, such as Rescue of the Bounty, Fatal Forecast, Overboard!, A Storm Too Soon, and The Finest Hours (soon to be a major motion picture by Disney). Ten Hours Until Dawn was selected as one of the American Library Association's "Best Books of the Year."

Alison O’Leary is a former reporter for the The Boston Globe, a magazine editor, and a freelance writer. Her work has appeared in newspapers and magazines across the country.
Loading...
or
Not Currently Available for Direct Purchase