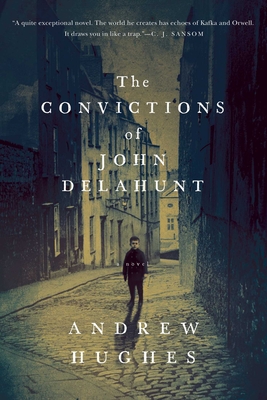 The Convictions of John Delahunt (Paperback)

Beautifully observed, seductive, and laced with dark humor, a gripping historical thriller — set in 1840s Dublin — about a man who betrays his family, his friends, his society and, ultimately, himself.

Dublin, 1841. On a cold December morning, a small boy is enticed away from his mother and his throat savagely cut. This could be just one more small, sad death in a city riven by poverty, inequality and political unrest, but this murder causes a public outcry. For it appears the culprit - a feckless student named John Delahunt - is also an informant in the pay of the authorities at Dublin Castle. And strangely, this young man seems neither to regret what he did, nor fear his punishment. Indeed, as he awaits the hangman in his cell in Kilmainham Gaol, John Delahunt decides to tell his story in this, his final, deeply unsettling statement...


Based on true events that convulsed Victorian Ireland, The Convictions of John Delahunt is the tragic tale of a man who betrays his family, his friends, his society and, ultimately, himself. Set amidst Dublin's taverns, tenements, courtrooms, and alleyways and with a rich, Dickensian cast of characters, this enthralling, at times darkly humorous novel brilliantly evokes a time and a place, and introduces a remarkable new literary voice.

Praise For The Convictions of John Delahunt: A Novel…

Historian Hughes puts his knowledge of mid-19th-century Ireland to masterly use in his chilling first novel. This beautifully written tale of cruelty and redemption is as unforgettable as it is harrowing.

A
remarkable first novel. At once a close character study and a sweeping panorama
of 'dissectionists' who buy bodies for medical research and the 'resurrectionists' who dig them up, this fascinating book is a stirring work of
fiction and a perceptive chapter in Ireland’s social history.
— Marilyn Stasio

There is a dark resignation to Delahunt’s tale and at times an almost manic, Sweeney Todd–like urgency. Recommend this atmospheric historical fiction to fans of John Banville or Margaret Atwood’s Alias Grace (1996).


Andrew
Hughes has created an eerily authentic world where one’s neighbors cannot be
trusted and the authorities even less. John’s rapid decline from aimless student
to cold-blooded killer is not only chilling, but sophisticated in its telling.
Superb.

Fascinating.
A
mesmerizing, utterly convincing, utterly sympathetic tale of life in Victorian
Dublin. A realistic, complex tale that raises important, topical questions
about society, government and morality. And the writing itself is really quite
terrific. An exceptional historical mystery.

A Kafkaesque study of an amoral weakling consumed by an unrestrained bureaucracy.

An engrossing historical
mystery. Gallows humor and Dickensian details permeate Hughes’ debut, one that
takes readers to the dark heart of a series of real crimes in Victorian Dublin.

A quite exceptional novel. The world he creates has echoes of Kafka and Orwell. Totally convincing. It draws you in like a trap.
— C. J. Sansom, author of Dissolution and Winter in Madrid

Just
about everything pays off in this engrossing 'Crime and Punishment' style tale.
Fascinating. The novel is mean and wicked and really well done.

Compelling and eerily authentic. Read it and be grateful to be alive in our day and age.
— Robert Goddard

Extraordinarily detailed world, impeccably researched. So superbly written that it soars as a masterly work of fiction. Utterly compelling.