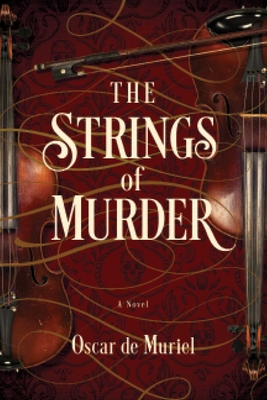 The Strings of Murder

The brutal slaying of a violinist in his home in 1888 sparks a locked room murder mystery investigated by two diametrically opposed Edinburgh detectives.

1888: a violinist is brutally murdered in his Edinburgh home. Fearing a national panic over a copycat Jack the Ripper, Scotland Yard send Inspector Ian Frey. Frey reports to Detective "Nine-Nails" McGray, local legend and exact opposite of the foppish English Inspector. McGray’s tragic past has driven him to superstition, but even Frey must admit that this case seems beyond belief...

There was no way in or out of the locked music studio. And there are black magic symbols on the floor. The dead man’s maid swears there were three musicians playing before the murder. And the suspects all talk of a cursed violin once played by the Devil himself.

Inspector Frey has always been a man of reason—but the longer this investigation goes on, the more his grasp on reason seems to be slipping...

Praise For The Strings of Murder: A Novel…

"A great Victorian gothic romp. This should build into a lovely series."
— Lovereading.co.uk

"This is wonderful. A brilliant, moving, clever, lyrical book?. I loved it. Oscar de Muriel is going to be a name to watch."
— Manda Scott

"The relationship between the two detectives and Oscar de Muriel's sparkling dialogue really elevate this murder mystery. Great wit and humor are on display as the cops gradually learn to appreciate each other's skills and intelligence, all the while sparring with great gusto. With such a colorful background, intriguing characters and a satisfyingly twisting plot, The Strings of Murder is a pleasure to read."
— BookBrowse

Oscar de Muriel is a violinist, translator, and chemist - and the author of three other novels in this popular series, The Strings of Murder, A Fever of the Blood, and A Mask of Shadows. He lives in England.
Loading...
or
Not Currently Available for Direct Purchase