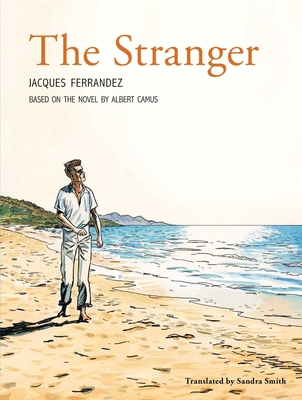 The day his mother dies, Meursault notices that it is very hot on the bus that is taking him from Algiers to the retirement home where his mother lived; so hot that he falls asleep.

Later, while waiting for the wake to begin, the harsh electric lights in the room make him extremely uncomfortable, so he gratefully accepts the coffee the caretaker offers him and smokes a cigarette. The same burning sun that so oppresses him during the funeral walk will once again blind the calm, reserved Meursault as he walks along a deserted beach a few days later—leading him to commit an irreparable act.

This new illustrated edition of Camus's classic novel The Stranger portrays an enigmatic man who commits a senseless crime and then calmly, and apparently indifferently, sits through his trial and hears himself condemned to death.

Praise For The Stranger: The Graphic Novel…

"Ferrandez excels with the pale vistas and brilliant light of Algeria, almost a character in the story. This expressive and attractive version of Camus’s challenging parable makes a fine introduction to the work for older teens through adults."
— Library Journal

Albert Camus was born in Algeria in 1913. During World War II, he joined the Resistance movement in Paris, then became editor-in-chief of the newspaper Combat during the Liberation. A novelist, playwright, and essayist, he is most famous for his novels The Stranger and The Plague. He was awarded the Nobel Prize for Literature in 1957.

Sandra Smith is the translator of all twelve novels by Irene Nemirovsky; a new translation of Camus' L'Etranger (The Outsider, Penguin UK); and The Necklace and Other Stories: Maupassant for Modern Times (Liveright). Her translation of Nemirovsky's Suite Francaise won the French-American Foundation and Florence Gould Foundation Translation Prize for Fiction, as well as the PEN Book-of-the-Month Club Translation Prize. After ten years as a Fellow of Robinson College, Cambridge, Smith now lives in New York.

Jacques Ferrandez was born in Algeria in 1955. In 1987, he began his Notebooks from the Orient, a series of panoramic portraits depicting the history of the French presence in Algeria, for which he was awarded the Historia Prix Spécial. An indisputable expert on the Algerian question, he adapted Camus’s novel The Stranger as well as his new interpretation of The First Man. His books have been the subject of many exhibitions in France and Algeria.
Loading...
or
Not Currently Available for Direct Purchase