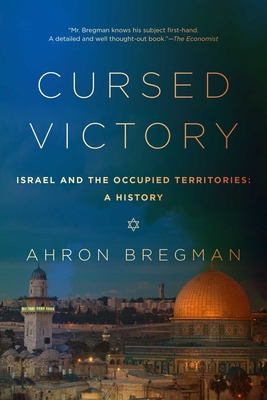 A History of Israel and the Occupied Territories, 1967 to the Present

An authoritative and impassioned history of the aftermath of the Six Day War—by a former Israeli soldier—and a cogent argument for an end to the occupation.

In a move that would forever alter the map of the Middle East, Israel captured the West Bank, Golan Heights, Gaza Strip and Sinai Peninsula in 1967's brief but pivotal Six Day War. Cursed Victory is the first complete history of the war's troubled aftermath—a military occupation of the Palestinian territories that is now well into its fifth decade.


Drawing on unprecedented access to high-level sources, top-secret memos and never-before-published letters, the book provides a gripping and unvarnished chronicle of how what Israel promised would be an 'enlightened occupation' quickly turned sour, and the anguished diplomatic attempts to bring it to an end. Bregman sheds fresh light on critical moments in the peace process, taking us behind the scenes as decisions about the fate of the territories were made, and more often, as crucial opportunities to resolve the conflict were missed. As the narrative moves from Jerusalem to New York, Oslo to Beirut, and from the late 1960s to the present day, Cursed Victory provides vivid portraits of the key players in this unfolding drama, including Moshe Dayan, King Hussein of Jordan, Bill Clinton, and Yasser Arafat. Yet Bregman always reminds us how diplomatic and back-room negotiations affected the daily lives of millions of Arabs, and how the Palestinian resistance, especially during the first and second intifadas, and now in recent tragic developments, have shaped the political arena.

As Bregman concludes, the occupation has become a dark stain on Israel's history. Cursed Victory is essential reading for anyone who wants to understand the origins of the ongoing conflict in the region.

Born in Israel in 1958, Ahron Bregman was a soldier in the 1982 Lebanon War and reached the rank of captain. He then studied in Jerusalem and London, completing a doctorate in War Studies at King's College London. He is the author of Israel's Wars: A History Since 1947 and A History of Israel. An academic and journalist, Bregman teaches at the Department of War Studies, King's College London.

Praise For Cursed Victory: A History of Israel and the Occupied Territories, 1967 to the Present…

A plainspoken but urgent account that is deeply critical of Israel's policies.

Ahron Bregman may be one of the most pointedly qualified people on Earth to write a book about the Israeli occupation of Palestine that began in the wake of 1967’s Six Day War. Bregman takes his readers through the entire torturous narrative of the Israeli occupation of the captured territories. It’s clearly the author’s intention to avoid podium-pounding invective in this book, and he succeeds – this is an entirely sober account of an insane and vicious reality.

Impressive. Cursed Victory fills an important gap in the literature on the occupied territories. A comprehensive, chronological account.


Bregman tells this bleak story well, and what a catalogue of grief it is. A damning verdict.

A former Israeli soldier in Lebanon, Mr Bregman knows his subject first-hand. As an academic at King’s College London, he has accumulated copious documents, many of them secret and unpublished. A detailed and well thought-out book.

Lucid ... timely ... Bregman has assets which lift this account above many on the Israeli-Palestinian conflict. One is access to some hitherto secret material. Cursed Victory is a highly readable study, an excellent starting point for those wanting to know more about how military victory turned into a tragedy.


It is the best available book on the Israeli occupation of the Territories and why it should be ended ASAP; and one written with the kind of lucidity and insight only somebody who passionately loves his country can muster.
— Martin van Creveld, author of The Transformation of War

Bregman’s deep familiarity with the material and his stylistic clarity will appeal to readers seeking an overview of the Arab-Israeli conflict.