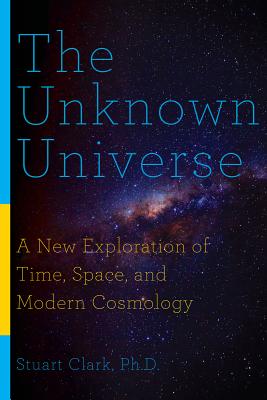 A New Exploration of Time, Space, and Modern Cosmology

A groundbreaking guide to the universe and how our latest deep-space discoveries are forcing us to revisit what we know—and what we don't.

On March 21, 2013, the European Space Agency released a map of the afterglow of the Big Bang. Taking in 440 sextillion kilometres of space and 13.8 billion years of time, it is physically impossible to make a better map: we will never see the early universe in more detail. On the one hand, such a view is the apotheosis of modern cosmology, on the other, it threatens to undermine almost everything we hold cosmologically sacrosanct.


The map contains anomalies that challenge our understanding of the universe. It will force us to revisit what is known and what is unknown, to construct a new model of our universe. This is the first book to address what will be an epoch-defining scientific paradigm shift. Stuart Clark will ask if Newton's famous laws of gravity need to be rewritten; if dark matter and dark energy are just celestial phantoms? Can we ever know what happened before the Big Bang? What’s at the bottom of a black hole? Are there universes beyond our own? Does time exist? Are the once immutable laws of physics changing?

Stuart Clark, Ph.D., is a Fellow of the Royal Astronomical Society and is the astrology correspondent for The New Scientist. Stuart holds a first-class honors degree and a Ph.D. in astrophysics. The Sun Kings, which established him as a popular science writer of the highest level, was shortlisted for the Royal Society science book prize and won the Association of American Publishers 2007 Professional and Scholarly Publishing Award for Excellence in the Cosmology and Astronomy category. Stuart lives in England.

Praise For The Unknown Universe: A New Exploration of Time, Space, and Modern Cosmology…

The author brings the subject up to 2015 with the obligatory new discovery combined with a fine history of cosmology, and he makes it clear that our knowledge and ignorance seem to be expanding in parallel. Since satisfying results have yet to turn up, Clark's book ends on a cliffhanger, but readers will be entirely pleased with the experience.

Herein lies the tale of intrepid astronomers, across time and cultures, who were the first to observe, identify, and document our misbehaving Sun. A delightful, informative read.
— Neil deGrasse Tyson, astrophysicist, author of 'Death by Black Hole: And Other Cosmic Quandaries?'

The balance of brief biographies, technical exposition, intriguing trivia, and big-picture thinking is just right for the context. There’s plenty of fresh and fascinating information to learn. The exciting recent discovery of gravitational waves will make this title all the more relevant for the cosmologically curious.

Clark is writing for a popular science audience who will enjoy his lively and eminently readable account of the lives and scientific careers of those whose work furthered the understanding of the Sun-Earth connection.
— Richard C. Canfield

Strikes a new chord in American cosmological thinking. Clark has taken a comprehensive perspective to discover nuances in the meaning of well-known theories from the most celebrated theorists.

Accessible to any reader with basic mathematical understanding, but also enriching for specialists, providing ample references to technical papers for further reading. The Unknown Universe reminds us that the quest for knowledge demands uncompromising skepticism and abundant humility alongside the insatiable curiosity that has always characterized the human heart.

A sprightly and spirited narrative. I found myself captivated by the characters, the colossal problems they tackled, and the stunning conclusions they finally reached. I commend Clark for combining so many interesting ideas into a single, fast-paced, beautifully crafted story.
— Dava Sobel, author of 'Longitude,' 'Galileo's Daughter,' and 'The Planets?'

Clark's easily absorbed prose places readers deep in the middle of exciting new models, ideas and analysis that are requiring scientists to rethink what they had thought they knew about outer space.

Stuart Clark illuminates the dawn of astrophysics. No faceless automatons, the scientists in this tale blend a passion for their work with the more worldly passions of pride, jealousy, greed, and lust.
— Robert P. Kirshner, Clowes Professor of Science, Harvard University
or
Not Currently Available for Direct Purchase
Copyright © 2020 American Booksellers Association