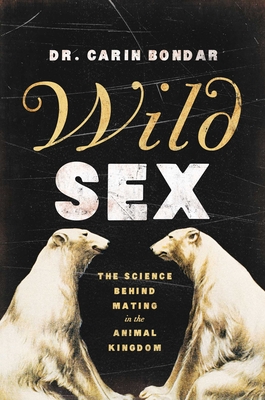 A brilliantly engaging guide to the reproductive habits of creatures great and small, based on the author’s popular webseries "Wild Sex," which has received over 14 million views

Birds do it, bees do it — every member of the animal kingdom does it, from fruit flies to blue whales. But if you think humans have a tough time dating, try having to do it while being hunted down by predators, against a backdrop of unpredictable and life-threatening conditions. The animal kingdom is a wild place – and it’s got mating habits to match. The sex lives of our animal cousins are fiendishly difficult, infinitely varied, often incredibly violent — and absolutely fascinating.

In Wild Sex, Dr. Carin Bondar takes readers on an enthralling tour of the animal kingdom as she explores the diverse world of sex in the wild. She looks at the evolution of sexual organs (and how they’ve shaped social hierarchies), tactics of seduction, and the mechanics of sex. She investigates a wide range of topics, from whether animals experience pleasure from sex to what happens when females hold the reproductive power. Along the way, she encounters razor-sharp penises, murderous carnal cannibals, and spontaneous chemical warfare in an epic battle between the sexes.

The resulting book is titillating, exhilarating, amusing, petrifying, alluring — and absolutely guaranteed to make you think about sex in a whole new way.

"As Bondar proves in Wild Sex, the world of animal mating can be much more complicated than trying to figure out if what you swiped right on is a catfish. Wild Sex looks at the animal laws of attraction, physical act of sex and reproduction patterns of several animal species, including the obstacles some animals must overcome to perpetuate their species: The male redback spider, for example, is consumed by its cannibalistic female partner after copulation. And you thought OkCupid was rough."
— Chicago Tribune

"A densely packed but hugely entertaining exploration of nookie in the natural world. It is Bondar’s robust relish for her subject and her informed unravelling of the science of sex that make the book so fascinating."
— Mail on Sunday (UK)

"Chatty and engaging. Bondar takes readers on an encyclopedic tour of sex across the animal kingdom. Stories about sex are fun to read, and Bondar makes them informative, too."
— Publishers Weekly

"Carin Bondar’s fascinating study is a sort of ‘everything you wanted to know about wildlife sex but were afraid to ask.’ Nookie in the wild is a complete stranger to political correctness. It reads more like the depraved antics of the Greek gods or the nobles in Game Of Thrones."
— Daily Express (UK)

"Biologist Bondar breaks down mating rituals in short, comprehensive chapters that are a treat to read. A fascinating and entertaining read for amateur biologists that reminds us that as humans we are not alone in our sexual propensities and prowess."
— Library Journal

"Entertaining. Racy in tone, and full of the sort of lurid detail with which you can reduce a dinner party to silence, this is a lively read with a heavyweight scientific bibliography."
— Daily Mail

"Sex and death, mating rituals, mating calls and the animal smells that humans cover with perfumes are all part of this amusing, informed study."
— Sydney Morning Herald

"A lively exploration of ‘the nitty-gritty of the diverse sex life of animals.’ A fascinating peek into the intimate behavior of our animal cousins that provides new insight into the benefits of being human."
— Kirkus Reviews

Dr. Carin Bondar received a PhD in population ecology from the University of British Columbia and has hosted a variety of online and television programs at Scientific American, PBS Digital Studios, and the Science Channel. She is also the author of Wild Sex and lives in British Columbia, Canada.
Loading...
or
Not Currently Available for Direct Purchase