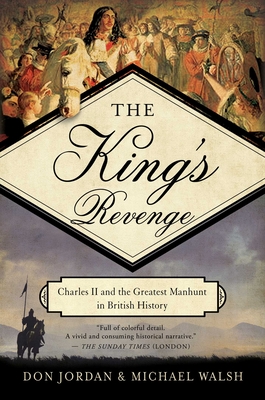 Charles II and the Greatest Manhunt in British History

Set in an age of intrigue and espionage, this is the story of the greatest manhunt in British history: the quest for retribution upon the traitors who brought about the death of Charles I.

When Charles I was executed, his son Charles II made it his role to seek out retribution, producing the biggest manhunt Britain had ever seen, one that would span Europe and America and would last for thirty years.


"We shall pursue and bring to their due punishment those bloody traitors who were either actors or contrivers of that unparalleled and inhuman murder."

So vowed the nineteen-year-old Prince of Wales, following the beheading of his father Charles I in January 1649. From exile, he instigated what became the biggest manhunt the nation had ever seen, spreading out across Europe and America and lasting for over thirty years. When he ascended to the throne in 1660 as Charles II, his search for revenge intensified, with show trials in London and assassination squads scouring foreign countries.

Many of the most senior figures in England were hanged, drawn and quartered; imprisoned for life; or consigned to a self-imposed exile, in constant fear of the assassin's bullet.

History has painted the regicides and their supporters as fanatics, but among them were exceptional men, including John Milton, poetic genius and political propagandist; Oliver Cromwell's steely son-in-law, Henry Ireton; and the errant son of an earl, Algernon Sidney, whose writings helped inspire the founders of the American Revolution. Cromwell himself was subjected to the most bizarre symbolic revenge when—though long-dead—his body was disinterred and beheaded.

Set in an age of intrigue and betrayal, The King's Revenge brings these remarkable figures vividly to life in an engrossing tale of ambition, double agents, and espionage.

Don Jordan has twice won a Blue Ribbon Award at the New York Film and Television Festival and has written four books with Michael Walsh. He lives in London.

Michael Walsh has won a Royal Television Society Award. Together with Don Jordan he has written four books, including White Cargo, acclaimed by Nobel Laureate Toni Morrison as an "extraordinary book." He lives in London

Praise For The King's Revenge: Charles II and the Greatest Manhunt in British History…

A bloody history of treachery and retribution told with zest. An absorbing narrative that shifts the focus from monarchs to rebels.

A thoroughly entertaining account of these extraordinary events. A vivid and consuming piece of historical narrative.

Crafted like a spy novel as Charles II set about to find the living regicides, this work will intrigue readers with the breadth and ruthlessness of the king’s search.

Jordan and Walsh showcase their wit throughout a clear disentangling of alliances and betrayals. The book’s strength is humanizing this diverse group of hunted men, and Jordan and Walsh give readers good reason to revisit the infamous and implacable revolutionaries who murdered a monarch and later lost everything.

In this beautifully detailed and seamlessly written book Jordan and Walsh shine a new light on Charles II. Their energetic and masterful account makes for a Restoration romp worth reading.

An absorbing history packed with more plotting than an episode of The Borgias.

This is a terrific read.
or
Not Currently Available for Direct Purchase
Copyright © 2020 American Booksellers Association