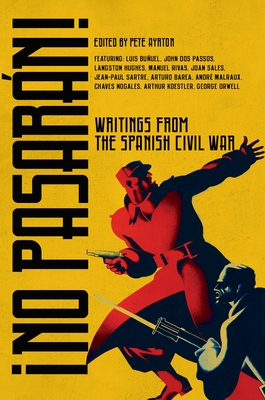 Writings from the Spanish Civil War

From the homefront to the heat of battle, the first truly international Spanish Civil War anthology.

Hope, resignation, despair, sadness, humor, confusion, ruthlessness, compassion, kindness, generosity and love inhabit Pete Ayrton's anthology of writings from the Spanish Civil War: there is little sense of triumphalism among the bewilderingly diverse Republican and Nationalist coalitions, all shades of which are represented here.

Acclaimed editor Pete Ayrton brings together hauntingly vivid stories from a bitterly fought war. This is writing of a high order that allows the reader to witness life from the front lines of this momentous conflict.


Praise For No Pasarán!: Writings from the Spanish Civil War…

Peter Ayrton rises above the political infighting and sectarianism and gives us a bottoms-up history as told by working-class Spaniards.

The real strength of No Man's Land is the sheer diversity of the voices it offers, especially those from fronts often overlooked or considered peripheral.


Ayrton has achieved something very rare and powerful in this book, a brilliantly edited collection of fiction. Essential reading for anyone interested in history, literature, or the human condition.

The essential collection of writing from the First World War. Wonderfully wide-ranging.

As diverse in attitudes as it is in geography. A tribute to the art of translation. Marvelous.

Superb. An impressive anthology that bears an extraordinary cargo of human experience, and is an enlightenment for those who think only of the western front when they remember the First World War.

Pete Ayrton was born in London in 1943. After a brief period teaching philosophy, his work as a translator led to an editorial position and later to his founding of Serpent's Tail. No Man's Land, his collection of writings from World War I, was highly acclaimed on both sides of the Atlantic and was named one of the Economist's Books of the Year.
or
Not Currently Available for Direct Purchase