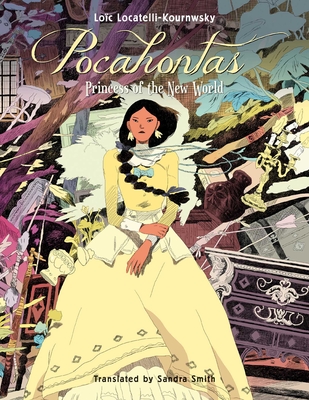 A stunning interpretation of the unforgettable story of America’s greatest Indian princess, vividly illustrated as never before.

Pocahontas, daughter of Chief Powhatan, has been promised to her betrothed, Kokum, according to custom. At that very moment, three British ships arrive on the coast of America.

It is 1607, and the life of Pocahontas—like the fate of the entire American continent—is about to change dramatically. With her great love of freedom—as well as her belief in understanding and tolerance between the two peoples—and by defying her father’s taboos, Pocahontas forges a relationship with the British colonists who have just disembarked. She secretly provides them with food and saves the life of the handsome Captain Smith . . . and falls madly in love.

Set in pre-colonial America, this dynamic new graphic novel evokes the end of a way of life against the backdrop of territorial and amorous rivalries.

Praise For Pocahontas: Princess of the New World…

"Unlike Disney’s focus on the more romantic and mythic elements of Pocahontas’ relationship with Captain John Smith, this version of the story depicts a young woman not acting out of love, but instead preventing an execution that she believes to be morally wrong. The art by Loïc Locatelli-Kournwsky balances simple and easy-to-read character designs with detailed environments and costumes."
— The Quietus

"This gorgeous volume that retells this story from pre-colonial America is intelligently written and page after page full of vividly individualistic artwork that is a marvel to read and enjoy whether you know the details of the tale or not. Poetic and energetic."
— Bookgasm

"Here is a story that will greatly resonate with anyone struggling with issues of Otherness. Spirited and quite informative."
— Comics Grinder

"This version of Pocahontas’s history is effective in highlighting a sense of displacement with both her tribe and the English. All parties are refreshingly dimensional—there are good and bad characters in both camps. Hatched shadows are used to add atmosphere and highlight characters from backgrounds. Many panes wordlessly illustrate transitions in Pocahontas’s life entirely through expressions and body language—dialogue is unnecessary."
— Historical Novels Review

Loic Locatelli-Kournwsky was born in Oyonnax in eastern France in 1987. He has published three graphic novels: Canis Majoris, a personal account on the trials and tribulations of suicide; Ni Dieu Ni Maitre (No God No Master); and the very well-received Vaincus Mais Vivants (Conquered but Alive), published by Lombard Editions. This is his first graphic novel to be translated into English. He currently lives and works in Lyon.

Sandra Smith is the translator of all twelve novels by Irene Nemirovsky; a new translation of Camus' L'Etranger (The Outsider, Penguin UK); and The Necklace and Other Stories: Maupassant for Modern Times (Liveright). Her translation of Nemirovsky's Suite Francaise won the French-American Foundation and Florence Gould Foundation Translation Prize for Fiction, as well as the PEN Book-of-the-Month Club Translation Prize. After ten years as a Fellow of Robinson College, Cambridge, Smith now lives in New York.
Loading...
or
Not Currently Available for Direct Purchase