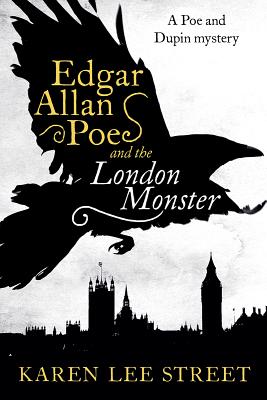 The famed writer and poet sails to London to engage the illustrious detective Auguste Dupin to solve a Poe family mystery, in a stylish and brilliantly constructed debut novel.

Summer, 1840. Edgar Allan Poe sails from Philadelphia to London to meet his friend C. Auguste Dupin, with the hope that the great detective will help him solve a family mystery. For Poe has inherited a mahogany box containing a collection of letters allegedly written by his grandparents, Elizabeth and Henry Arnold.

The Arnolds were actors who struggled to make a living on the London stage, but the mysterious letters suggest that the couple has a more clandestine and nefarious lifestyle, stalking well-to-do young women at night, to slice their clothing and derrières.

Poe hopes to prove the missives forgeries; Dupin wonders if perhaps they are real, but their content fantasy. Soon Poe is being stalked by someone who knows far more about his grandparents and their crimes than he does. And then he remembers disturbing attacks made upon him as a child in London—could the perpetrators be connected?

Praise For Edgar Allan Poe and the London Monster: A Novel…

"Poe’s devoted readers will rejoice in this debut literary novel, a skillful melding of historical detail and fiction that is also rife with Poe-like style, imagery, and plot elements. Mavens of the macabre will relish this and hunger for a sequel."
— Library Journal (starred)

"A dose of drama, a dash of darkness, and a little bit of humor ultimately liven up the journey."
— Kirkus Reviews

"Poe narrates the story in an impressive approximation of his own rather baroque writing voice, and there are plenty of references to elements that were to subsequently appear in Poe’s fictional and poetical works. Entertaining and well-written."
— Historical Novels Review

"Deliciously morbid. The prose has a lush, sumptuous rhythm to it. Street is fully in control of her material and the sheer exuberance of her writing ensures that the story never once tips over into parody or pastiche. This is a dark, highly satisfying mystery combining beautiful writing with suspense and unease."
— Ripperologist

Karen Lee Street was born in America but has lived in London for most of her adult life. She recently moved to Australia. Edgar Allan Poe and the London Monster is her first novel.
Loading...
or
Not Currently Available for Direct Purchase