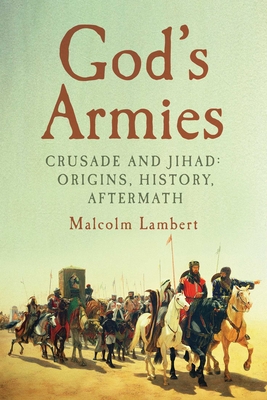 With ramifications on geopolitics today, a vivid chronicle of the Christian and Islamic struggle to control the sacred places of Palestine and the Middle East between the seventh and thirteenth centuries.

Crusade and jihad are often reckoned to have represented two sides of the same coin: each resonated on the opposing sides in the holy wars of the Middle Ages and each has been invoked during the war on terror.

A chronicle of the Christian and Islamic struggle to control the sacred places of Palestine and the Middle East between the seventh and thirteenth centuries, this dynamic new history demonstrates that this simple opposition ignores crucial differences. Placing an equal emphasis on the inner histories of Christianity and Islam, the book traces the origins and development of crusade and jihad, showing for example that jihad reflected internal tensions in Islam from its beginnings. The narrative also reveals the ways in which crusade and jihad were used to disguise ambitions for power and to justify atrocity and yet also inspired acts of great chivalry and heroic achievement. The story brims with larger than life characters, among them Richard the Lionheart, Nur al-Din, Saladin, Baybars, and Ghengiz Khan.

Lambert concludes by considers the long after-effects of jihad and crusade, including the role of the latter in French imperialism and of the former in the wars now afflicting the Middle East and parts of Africa. This vivid, balanced account will interest all readers who wish to understand the complexities of the medieval world and how it relates our own.

"Recognizing that the Christian crusades unfolded in a world shaped by Islamic jihads, Lambert scrutinizes both militant forms of religion simultaneously. In a world where memories of crusader atrocities sustain virulent new forms of jihad, such balanced scholarship offers hope of interfaith understanding."
— Booklist (starred)

"An all-encompassing introduction to the Christian-Islamic struggle for the armchair history buff."
— Kirkus Reviews

"Enthusiastically embracing intricacy and eschewing oversimplification, Lambert boldly plunges into the struggle between Christianity and Islam to control the Middle East between the seventh and 13th centuries. Recommended not only for history buffs but for anyone seeking a better understanding of the deep roots of today’s news stories."
— Library Journal

Malcolm Lambert was formerly a professor of theology and medieval history at the University of Bristol. His previous books for the academic market include Christians and Pagans, Franciscan Poverty, Medieval Heresy, and The Cathars. God's Armies is his first book for a general audience. He lives in England.
Loading...
or
Not Currently Available for Direct Purchase