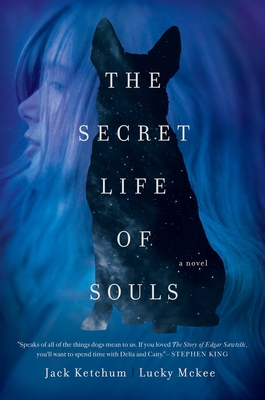 The Secret Life of Souls

A gripping family drama that brilliantly explores the relationship between a young girl and her dog—and the mysteries that lie within.

At the heart of this psychological suspense novel is the haunting depiction of a family’s fall and the extraordinary gifted dog, Caity, who knows the truth. As the drama unfolds Caity evolves from protector to savior, from scapegoat to prop, and eventually, from avenger to survivor. She is an unselfish soul in a selfish world—and she is written with depth and grace by authors Ketchum and Mckee, who display a profound understanding of a dog’s complex emotions. With her telling instincts and her capacity for joy and transformative love, Caity joins the pantheon of great dogs in contemporary literature.

Eleven year old actress Delia Cross is beautiful, talented, charismatic. A true a star in the making. Her days are a blur of hard work on ­set, auditions and tutors. Her family—driven, pill­-popping stage mother Pat, wastrel dad Bart, and introverted twin brother Robbie—depends on her for their upscale lifestyle. Delia in turn depends on Caity, her beloved ginger Queensland Heeler—and loyal friend—for the calming private space they share. Delia is on the verge of a professional break through. But just as the contracts are about to be signed, there is a freak accident that puts Delia in the danger zone with only Caity to protect her.

Praise For The Secret Life of Souls: A Novel…

"The Secret Life of Souls is a terrifying, can’t­-put-­it-­down narrative of a family on the verge of disintegration. It’s also a classic, heart­-tugging, story of a girl and her dog. Feels like Matheson in his prime. Clean, stripped­-down writing, with an incredible pace. Jack Ketchum and Lucky McKee have written one hell of a novel, one that speaks of all the things dogs mean to us. If you loved The Story of Edgar Sawtelle, as I did, you’ll want to spend some time with Delia and Caity."
— Stephen King

"Takes its place alongside Megan Abbot's recent You Will Know Me as one of the darkest and shrewdest novels about greedy parents and unthinkingly abused children. There is no shortage of eerie satisfactions. Novelist Ketchum and screenwriter McKee deliver an otherworldly, satirically streaked thriller."
— Kirkus Reviews

"With equal parts horror and suspense and a heavy sense of dread throughout, Ketchum and McKee have crafted a tightly wound thriller with elements of magic that is sure to keep readers turning pages until the violent end."
— Booklist

"Tolstoy wrote that all unhappy families are unhappy in their own way, and the Cross family is no exception. Ketchum and McKee have imbued every page of their novel with a sense of suspense that will keep readers on their toes from start to finish."
— Shelf Awareness

"Ketchum and McKee have a winner with The Secret Life of Souls, a work that deservedly opens them up to a whole new world of readers who enjoy fine literary suspense novels."
— Bookreporter

"It is hard not to say that The Secret Life of Souls, which is actually sort of transcendent, represents the Bob, Son of Battle of horror novels. It is told with grace, warmth, humor, and plenty of good old narrative muscle to spare. But this book is more than even that. Ketchum and McKee not only collaborate, they managed to reach far down into themselves. This is a beautiful book."
— Peter Straub, author of 'Ghost Story,' 'Koko,' and 'A Dark Matter'

"The Secret Life of Souls is truly amazing in its subtle, creepy portrayal of the all-too-human monster that can lurk behind the loving eyes of a family member. I quite literally gasped in shock at unexpected turns of events. Deliciously disturbing."
— F. Paul Wilson, New York Times bestselling author of the 'Panacea and the Repairman Jack' novels

Jack Ketchum has published twelve novels and several short story collections. He has won numerous Bram Stoker Awards, and four of his books were recently filmed as movies: The Lost (2001), The Girl Next Door (2005), Red (2008) and Offspring (2009). He lives in New York City.

Lucky McKee wrote and directed the cult favorite film "May," which in turn got him selected to write and direct an episode ("Sick Girl") in the first season of Showtime's Masters of Horror series, alongside such directors as Tobe Hooper, Dario Argento, Joe Dante, John Landis, and John Carpenter.
Loading...
or
Not Currently Available for Direct Purchase