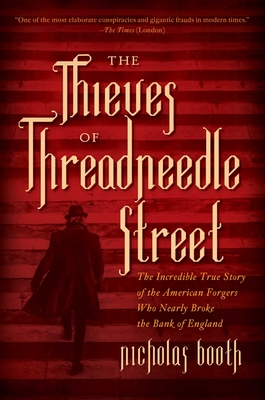 The Thieves of Threadneedle Street

The greatest untold crime saga of the Victorian Era: the extraordinary true story of four American forgers who tried to steal five million dollars from the Bank of England.

In the summer of 1873, four American forgers went on trial at the Old Bailey for the greatest fraud the world had ever seen: the attempted theft of five million dollars from the Bank of England. In The Thieves of Threadneedle Street, Nicholas Booth tells the extraordinary true story of the forgers' earliest escapades, culminating in the heist at the world’s leading financial institution. At the heart of the story is the charming criminal genius Austin Bidwell who, on the brink of escaping with his fortune, saw his luck finally run out.

There were double crosses and miraculous escapes. There were chases across rural Ireland, through Scottish cities, across the Atlantic on ships heading toward Manhattan and — most exotic of all — Cuba, where the most elusive thief would eventually be captured, only to escape again. Hot on their trail was William Pinkerton, "the greatest detective in America," scion of the famous detective agency.

With its cast of improbable villains, curious coincidences, and extraordinary adventures, this is an astounding international caper with twists and turns that often defy belief. With access to previously unopened archives, Nicholas Booth has unearthed the greatest untold crime saga of the Victorian Era.

Praise For The Thieves of Threadneedle Street: The Incredible True Story of the American Forgers Who Nearly Broke the Bank of England…

"A yarn of devilish daring that would make an awesome movie. On top of the story, Booth's book is informative in couple of ways that current investors may find useful."
— Forbes

"Booth does justice to the incredible true story of a group of audacious swindlers who took advantage of gaping holes in 19th-century British banking but were tripped up by a silly mistake. With a novelist’s flair, Booth opens with that criminal error. This account, the first to make use of the Bank of England’s archives, is likely to be the definitive narrative of this spectacular (if now obscure) crime."
— Publishers Weekly (starred)

Nicholas Booth is a writer and broadcaster. His most recent book was the acclaimed Zigzag - the incredible wartime exploits of double agent Eddie Chapman which is now in production by Tom Hanks Playtone company for Warners. A former newspaper journalist, editorial director, and mobile publisher, he lives in Cheshire, England with his wife.
Loading...
or
Not Currently Available for Direct Purchase