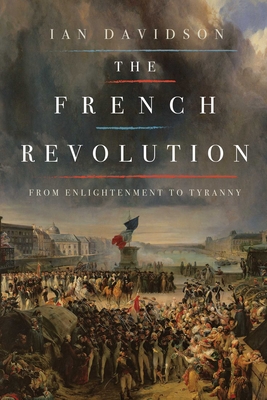 From Enlightenment to Tyranny

The French Revolution casts a long shadow, one that reaches into our own time and influences our debates on freedom, equality, and authority. Yet it remains an elusive, perplexing historical event. Its significance morphs according to the sympathies of the viewer, who may see it as a series of gory tableaux, a regrettable slide into uncontrolled anarchy—or a radical reshaping of the political landscape.

In this riveting new book, Ian Davidson provides a fresh look at this vital moment in European history. He reveals how it was an immensely complicated and multifaceted revolution, taking place in different places, at different times, and in different spheres; and how subsequently it became weighted with political, social, and moral values. Stirring and dramatic—and filled with the larger-than-life players of the period and evoking the turbulence of this colorful time—this is narrative history at its finest.

After graduating in Classics from Cambridge, Ian Davidson worked for the Financial Times for many years as their Paris correspondent and chief foreign affairs columnist. He is also the author of Voltaire (Pegasus) and Voltaire in Exile (Grove). Ian lives in England.

Praise For The French Revolution: From Enlightenment to Tyranny…

More than 200 years later, the world’s first true working-class revolution is little-enough understood that a new, nuts-and-bolts history, subtly but importantly reframed, feels essential and sadly all-too-relevant. The terror that followed feels inevitable today, but Davidson shows that it wasn’t.

An even-handed, step-by-step account of key moments of the French Revolution. A serious work of popular history, challenging enough to intrigue those already familiar with the revolution and accessible enough to engage those who are not.

Davidson aims to correct modern misperceptions of the French Revolution that toppled the ancien régime in 1789 and ushered in the First Republic. He persuasively argues that the aftershocks of this most turbulent era continue to reverberate into the 21st century.
or
Buy Here
(This book is on backorder)
Copyright © 2020 American Booksellers Association