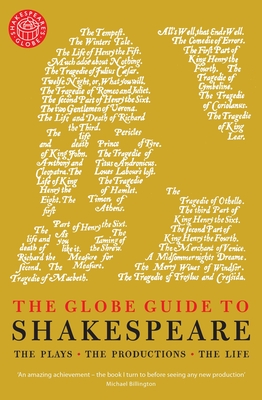 The Globe Guide to Shakespeare (Paperback)

The Plays, the Productions, the Life

In celebration of the 400th anniversary of Shakespeare's death and fully endorsed by Shakespeare's Globe Theatre, this is the ultimate guide to the life and work of the world's greatest playwright.

With full coverage of the thirty-nine Shakespearian plays (including a synopsis, full character list, stage history, and a critical essay for each), this comprehensive guide is both a quick reference and an in-depth background guide for theatre goers, students, film buffs, and lovers of literature. Along with an exploration of the Bard's sonnets and narrative poems, The Globe Guide to Shakespeare features fascinating accounts of Shakespeare's life and the Globe Theater itself, with colorful details about each play's original performance.

This comprehensive guide includes up-to-date reviews of the best films and audio recordings of each play, from Laurence Olivier to Baz Luhrmann, Kozintsev to Kurosawa. The Globe Guide to Shakespeare is the quintessential celebration of all things Shakespearian.

Andrew Dickson studied at Cambridge University. A former arts editor at the Guardian, he is now a freelance writer and critic, and he has written for The New Statesman and Sight and Sound. As well as being the author of The Rough Guide to Shakespeare, he has also contributed to The New Cambridge Companion to Shakespeare (2010). In 2014, he was a visiting fellow at the University of Warwick and is currently an honorary research fellow at Birkbeck, University of London. He makes regular appearances on BBC radio and television. A new book about his work and travel in Shakespeare around the globe, Worlds Elsewhere: Journeys Around Shakespeare’s Globe, will be published Henry Holt.

Praise For The Globe Guide to Shakespeare: The Plays, the Productions, the Life…

Dickson’s intention in writing this book is to ‘cut a path through the jungle’ to each play, the major poetry, central critical works, the best editions, as well as to provide concise treatment of the chief biographical and historical questions. He has succeeded beautifully. This reviewer can’t imagine a better source to recommend to students. Playgoers needing a reference guide before and/or after going to the theater will be delighted.

Compendious and likely to be extremely useful, whether you are just beginning Shakespeare or preparing to see your forty-eighth Hamlet.

What I like most about The Rough Guide to Shakespeare is that its author grinds no axes of any kind. His native good sense shines through on every page.

A reference work and more, which could hardly be bettered, strongly recommended to all students and playgoers.
— Professor Jonathan Bate, co-editor of "The RSC Shakespeare: The Complete Works"

An especially useful resource for theatergoers and for scholars and students interested in performance.
— Professor Kevin Curran, Studies in English Literature
or
Not Currently Available for Direct Purchase
Copyright © 2020 American Booksellers Association