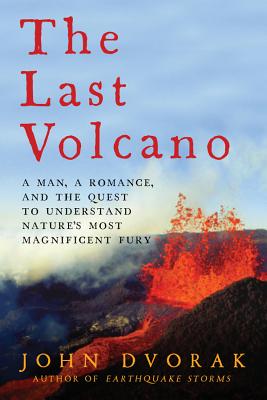 A Man, a Romance, and the Quest to Understand Nature's Most Magnificent Fury

Ranging from Yellowstone in Wyoming to Mount Pelee in the Caribbean, from Bogoslof and Pavlov in Alaska, to Sakurajima in Japan, and, finally, to the massive volcanoes of Kilauea and Mauna Loa in Hawaii—The Last Volcano reveals the incredible journey of a man on a mission to understand the awesome power of volcanic eruptions.

Volcanoes have fascinated—and terrified—people for ages. They have destroyed cities and ended civilizations. John Dvorak, the acclaimed author of Earthquake Storms, looks into the early scientific study of volcanoes and the life of the man who pioneered the field, Thomas Jaggar.

Educated at Harvard, Jaggar went to the Caribbean after Mount Pelee exploded in 1902, killing more than 26,000 people. Witnessing the destruction and learning about the horrible deaths these people had suffered, Jaggar vowed to dedicate himself to a study of volcanoes. What followed was fifty years of global travel to eruptions in Italy, Alaska, Central America, Japan and the Pacific.

In 1912, he built a small science station at the edge of a lake of molten lava at Kilauea volcano in the Hawaiian Islands, with the goal of solving the mystery of why volcanoes erupt and how they could be predicted. Jaggar found something else at Kilauea: true love.

She was Isabel Maydwell, a widowed school teacher who came to Kilauea to restart her life. For more than twenty ears, she and Jaggar ran the science station, living in a small house at the edge of a high cliff that overlooked the lava lake. Maydwell would quickly becoming one of the world’s most astute observers of volcanic activity.

Mixed with tales of myths and rituals, as well as the author’s own experiences and insight into volcanic activity, The Last Volcano reveals the lure and romance of confronting nature in its most magnificent form—the edge of a volcanic eruption.

Praise For The Last Volcano: A Man, a Romance, and the Quest to Understand Nature's Most Magnificent Fury…

A lively biography of the forgotten father of volcanology. Dvorak is a great storyteller with a keen eye for details. There are parts in The Last Volcano where Mr. Dvorak’s descriptions of the intense heat almost singe the page. Riveting.


Dvorak has done earthquake science sterling service by writing what is unarguably the best, the most comprehensive and compellingly readable book about the great fault that will one day affect all our lives.
— Simon Winchester, NEW YORK TIMES bestselling author of KRAKTOA

Bubbling and sloughing under the surface of John Dvorak's terrific new book The Last Volcano is the quietly terrifying reminder that we somehow manage to live on a tectonically active planet. A remarkable story. Every time Kilauea has bubbled and frothed and erupted since then, researchers on site have been indebted to Thomas Jaggar whether they knew it or not. And as for Yellowstone, it's relatively quiet—for the moment.


Dvorak brings not just a sharp understanding of the scientific issues involved,
but also a humanist's heart. He seeks to teach readers about volcanology—and
does so in terms that laypeople can comprehend—and he makes us feel the
excitement, the fear, and the intense heat of a lava flow. First-rate reporting
and erudition underlie this successful effort to re-establish the reputation of
an indispensable scientist.

Jaggar's thrilling adventures to volcanic hot zones like Alaska and Hawaii, where he explored inside active volcanoes, makes one appreciate the fearless nature required for a life of volcanology. Riveting. It leaves readers wanting to know more about how volcanology how has advanced since Jaggar's day.

For Dvorak, Kilauea is the last volcano, the one that will keep on erupting long after anyone who remembers Jaggar is gone. Fueled by a fire hose of molten rock from deep within the Earth, the volcano will continue to bubble and spurt and flame. And that’s just how Thomas Jaggar — despite all he’d seen — would have wanted it.

Dvorak layers mini-portraits in chronologically complex strata. Volcanos can seem like a distant threat. But Dvorak raises the stakes by examining a wider geologic network of earthquakes and tsunamis—and a human network of scientists who truly saved lives. Their shared passion, and Dvorak's own palpable love for the subject, send up sparks.

In this vividly written exploration of Jagger’s life and work, Dvorak (Earthquake Storms, 2014) covers not only the early years of volcanology but also dives into what propelled Jagger to fight so hard to learn more about volcanoes and the price he paid—a failed marriage and distant children—to gain that knowledge. Dvorak brings him to life in a richly researched narrative as thrilling as his topic, creating the sort of popular science history that flies off the shelves.


Captivatingly chronicles the life and times of this vanguard scientist [Thomas Jaggar]. Packed with details about Jaggar’s personal as well as professional life.

The story of Thomas Jagger and Isabel Maydwell is an inspiring tale of devotion, both to science and to each other.

A welcome addition. Its chief strength lies in combining the lives and personalities of key geologists and seismologists, such as Lawson, Charles Richter, John Tuzo Wilson and Kerry Sieh, with the theoretical essentials and practical details of their scientific work, so that the former really do illuminate the latter.

The real strength of Earthquake Storms is the clear and comprehensive treatment of geology as well as history, and offers a fascinating up-close look at the often overlooked people and stories behind science. Lastly, the book leaves readers in California with a bottom line as sobering as it is unassailable: We might not know exactly what storms lie ahead, but during all of our lifetimes, we have only ever known the lull.

— Susan Hough, former director of the Seismology Laboratory at CalTech

Originally trained as a lunar scientist, John Dvorak, PhD, spent twenty years operating a large telescope at Mauna Kea for the Institute for Astronomy, University of Hawaii.  His writing has appeared as cover stories for Scientific American, Astronomy and Physics Today.  His books include Earthquake Storms and The Last Volcano, both available from Pegasus Books.
or support indie stores by buying on