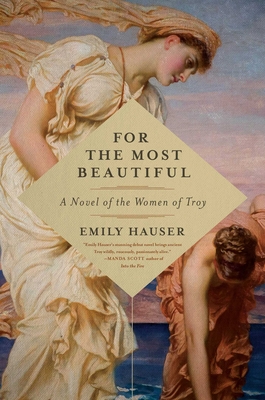 For the Most Beautiful

"Once in a while something comes along that’s so utterly right, that you wonder why nobody thought of it before. Hauser’s stunning debut novel brings ancient Troy wildly, raucously, passionately alive."
— Manda Scott, bestselling author of 'Boudica'

"In the vein of authors like Marion Zimmer Bradley and Ursula K. Le Guin, For the Most Beautiful gives this well-worn tale new life."
— Bookreporter

"A fascinating picture of life in Bronze-Age Troy, from the point of view of women at both the top and bottom of society. The author’s knowledge of, and respect for, the period shines through. Read it twice. You won’t regret it."
— Historical Novels Review

"A delight from start to finish. A clever premise and thoroughly enjoyable."
— Elizabeth Fremantle, author of 'Sisters of Treason'

"A fresh reinterpretation of the story of the Trojan War and the fall of Troy. Hauser’s characters are brave, willful, sometimes foolish, impulsive, and utterly relatable, and her portrayal of the manipulative, capricious gods is particularly wonderful. Extensively researched and based on many of the minor characters of Homer’s great work, this quick-paced, enthralling retelling will attract readers who loved Madeline Miller’s The Song of ­Achilles."
— Library Journal (starred)

"A brilliant reimagining of the Iliad, faithful to the original yet completely accessible. A lively new take on a classic."
— Terence Hawkins, author of 'The Rage of Achilles'

Emily Hauser studied Classics at Cambridge, where she was taught by Mary Beard. She then went to Harvard as a Fulbright Scholar and now teaches at Yale, where she is completing her PhD in Classics. She has won several prizes for her academic work, including the University of Cambridge Chancellor's Medal and the Alice Derby Lang Essay Prize at Yale. For the Most Beautiful the first book in the Golden Apple trilogy is her debut novel. She lives in New Haven, Connecticut.
Loading...
or
Not Currently Available for Direct Purchase