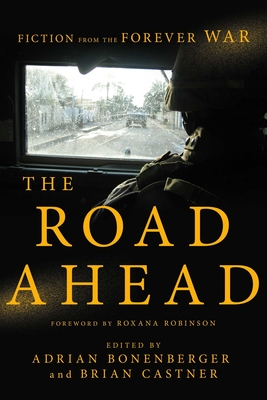 Fiction from the Forever War

A decade has passed since boots first hit the ground in Iraq and Afghanistan. Yet the war has not ended—only changed.  Twenty-five diverse veteran voices reflect the changing face of combat and reflect the haunting realities and truths only fiction can reveal.

These masterfully crafted stories from writers who have served reflect the entire breadth of human emotion–loss, anger, joy, love, fear, and courage—and the evolving nature of what has become America's "Forever War."

From debut writers to experienced contributors whose work has been featured in The New York Times, The Atlantic, and the New Yorker, this exceptional collection promises to be the definitive fictional look at the aftereffects of the Iraq and Afghan Wars and will resonate with the reader long after the final page.

Praise For The Road Ahead: Fiction from the Forever War…

"Savor each of the 24 distinctive tales by 24 veterans in a collection that makes you want to read more by the contributors."
— Military Times

"An anthology of stories covering a literary terrain as expansive as the seemingly endless 'war on terror' that spawned it. These stories provide plenty of revelation on the nature of the war and the soldiers who continue to fight it."
— Kirkus Reviews

"Most stories in The Road Ahead are told in a realistic mode, but suitable attention is paid to the surreal and disorienting elements of war and homecoming."
— Milwaukee Journal Sentinel

"Whatever image readers may have of veterans of the U.S. military’s seemingly never-ending engagement in Afghanistan, the ranks certainly included talented writers with sophisticated worldviews and ample amounts of self-awareness. That is reflected in nearly every one of the 24 stories collected in The Road Ahead."
— San Antonio Express-News

"Captures the truth about war better than nonfiction. It’s possible—likely even—that these pages from a handful of writers will come to define the warrior perspective for this generation. For that reason, this book is relevant. Its stories are tragic, moving, violent, and devastating, but not always in the ways one expects. It’s enough to enlighten those most insulated from the war."
— Task & Purpose

"The writers gathered in these pages are among the finest, and the material they are working with is, by its nature, powerful and compelling. The result is stories that are by turns brutal and hilarious, dark and redemptive. Every one of them speaks to a truth we should not, cannot, turn away from."
— Mary Roach, 'New York Times' bestselling author of 'Grunt: The Curious Science of Humans at War'

"These twenty-four intimate, brutal, unusual and honest portraits show us the startling effects of war, dispelling the myth that any military solution is simple. To this diverse group of writers, women and men, I say thank you for your wrenching stories. The cost of the wars in Iraq and Afghanistan is greater than we could have imagined."
— Bonnie Jo Campbell, author of 'Once Upon a River' and 'Mothers, Tell Your Daughters'

"The Road Ahead more than lived up to its promise—a shockingly brilliant salvo in the next wave of literature about our perpetual wars, a diverse and strange new literature which is utterly essential if we want to understand who we are as a nation, and what this era of constant war is doing to us, to our military, and to the countries where we send our men and women to kill and die."
— Phil Klay, National Book Award Winning author of 'Redeployment'

"If war is eternal, its form alters with the times. These vivid stories are the up-to-date bulletins from the frontline of today. Injustices abound, meaning eludes us, until for moments, it doesn’t. These writers deliver gut-wrecking reports of humanity at the edge of despair and offer us truths about the nature of war and the men and women struggling to survive it."
— Susan Minot, author of 'Thirty Girls and Evening'

"A stunning, poignant, astonishing, mournful, melancholy, brutally honest collection of stories about our wars in Iraq and Afghanistan, and makes this old soldier’s heart sore. They are so well written. If you want to understand our young soldiers and the world they lived in, read these stories."
— Larry Heinemann, National Book Award-winning author of 'Paco's Story' and 'Black Virgin Mountain'

Adrian Bonenberger is a student at SUNY Stony Brook Southampton’s MFA program for creative writing, from which he expects to graduate in May of 2016. He has a B.A. from Yale in English Literature and a M.S. in Journalism from Columbia. He joined the Army in 2005, and deployed twice to Afghanistan as an infantry officer. He has been featured in The New York Times, and has written military-themed essays for a variety of online and print publications including The New York Times, The Washington Post, Forbes, and Foreign Policy. He co-edits an intellectual blog, "The Wrath Bearing Tree" and volunteers with Words After War and the Yale Veterans Association. He is the author of the memoir Afghan Post.

Brian Castner is the author of The Long Walk, an Amazon Best Book of 2012. He previously served as an Explosive Ordnance Disposal officer, commanding bomb disposal units in Balad and Kirkuk, and as a military contractor and consultant, training soldiers and Marines prior to their tours in Iraq and Afghanistan. He has received grants from The Pulitzer Center on Crisis Reporting and Chautauqua Institution, and his writing has appeared in Wired, The New York Times, Foreign Policy, VICE News, The Los Angeles Review of Books, Outside, The Daily Beast, and on National Public Radio.
Loading...
or
Not Currently Available for Direct Purchase