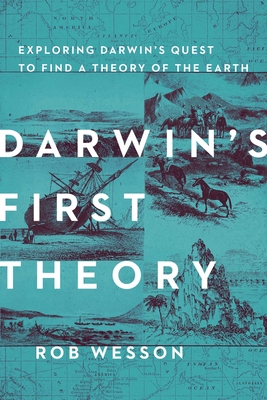 Exploring Darwin's Quest for a Theory of Earth

An acclaimed geologist leads the reader on an adventure through the landscape that absorbed and inspired Charles Darwin.

Everybody knows—or thinks they know—Charles Darwin, the father of evolution and the man who altered the way we view our place in the world. But what most people do not know is that Darwin was on board the HMS Beagle as a geologist—on a mission to examine the land, not flora and fauna.

Tracing Darwin’s footsteps in South America and beyond, geologist Rob Wesson sets out on a trek across the Andes, repeating the nautical surveys made by the Beagle’s crew, hunting for fossils in Uruguay and Argentina, and explores traces of long vanished glaciers in Scotland and Wales. By following Darwin’s path literally and intellectually, Rob experiences the landscape that absorbed Darwin, followed his reasoning about what he saw, and immerses himself in the same questions about the earth.

Upon Darwin’s return from the five-year journey, he conceived his theory of tectonics—his first theory. These concepts and attitudes—the vastness of time; the enormous cumulative impact of almost imperceptibly slow change; change as a constant feature of the environment—underlie his subsequent discoveries in evolution. And this peculiar way of thinking remains vitally important today as we enter the Anthropocene.

Praise For Darwin's First Theory: Exploring Darwin's Quest for a Theory of Earth…

"A wonderful evocation of Darwin's great theory of subsidence and uplift, the substrate of his later, explosive discovery of evolution."
— Nature

"An eye-opening account of a less well-known side of Darwin. Wesson hits the jackpot when he concentrates on his subject and reveals that 20 years before Darwin wrote On the Origin of Species, his genius was already in evidence. A welcome addition to Darwin studies."
— Kirkus Reviews

"In witty prose, Rob Wesson has captured a side of Darwin that is o en omitted in popular writings—that of a geologist. Appropriate quotes from Darwin and Robert Fitzroy, a polymath himself, enhance the eloquence of all three authors. Darwin’s First Theory reveals the power and the glory of curiosity. "
— Peter Molnar, Geologist, University of Colorado

"An impressive addition to the huge body of literature on Darwin and his work.  Wesson has a broad understanding and a deep familiarity with primary and secondary sources on Darwin and his contemporaries—and he has a master storyteller’s talent for engaging and illuminating narrative."
— Natural History Magazine

"Readers interested in Darwin, the earth sciences, and field-based research will find this well worth their time."
— Publishers Weekly (starred)

"A lively, readable account of field experiences while chasing the records in southern Chile of several of Earth's most severe earthquakes.  A very welcome addition to the history of the geosciences."
— Robert H. Dott, Jr., Geologist and Historian of Geology, University of Wisconsin

"An illuminating retelling of a neglected episode in epoch-making science."
— Booklist

"An absorbing read about the man who might have been remembered as the father of geophysics if he hadn’t come up with an even more spectacular idea. Darwin wasn’t always right, but by discussing his errors as well as his triumphs, this warts-and-all account highlights the way real science works, with lessons as relevant today as they were two hundred years ago."
— John Gribbin, author of "Fitzroy" and "Einstein's Masterwork"

"Rob Wesson has done a magnificent job of blending current science, a thorough historical understanding, and his own geological experience into a captivating account of Charles Darwin's first theory: the one about how the Earth evolved. Wesson has retraced Darwin's footsteps to better understand the giant earthquakes which then, as now, can massively devastate the places they occur. I'd certainly encourage anyone interested in the Earth to join Wesson and Darwin on their travels."
— Duncan Agnew, Professor of Geophysics, Scripps Institution of Oceanography

"A lively, readable account of Darwin’s geological career. The author’s study of primary sources enables the narrative of Darwin’s voyages to shine."
— The Quarterly Review of Biology

Rob Wesson received a BS in earth science from MIT, and an MS and PhD in geophysics from Stanford University. His career in earthquake research with the U.S. Geological Survey (USGS) spans four decades. He is currently a Scientist Emeritus at the USGS and his work has been supported by grants from the National Science Foundation. When not traveling to South America or elsewhere, Rob divides his time between his home in Evergreen, Colorado, and the cabin he built near McCarthy, Alaska.
Loading...
or
Not Currently Available for Direct Purchase