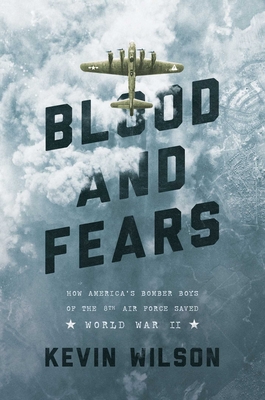 The heroic, dramatic, and sometimes tragic history of how the US 8th Air Force changed the course of World War II.

The US 8th Air Force came of age in 1944. With a fresh commander, it was ready to demonstrate its true power: from Operation Argument in February—targeting German aircraft production plants—to bringing the Luftwaffe to battle over Berlin, the combined US Air Force-Royal Air Force forces’ round-the clock campaign bottled up the German army in Normandy.

Day after day, the American bomber boys watched their comrades burn to death in blazing bombers, or observed their comrades being thrown out of exploding aircraft without parachutes and sink with their crippled aircraft in the freezing North Sea. But by the following spring they had destroyed the Nazi’s fighting spirit and saw Germany broken in two.

In this authoritative history, Kevin Wilson reveals the blood and heroism of the 8th Air Force. At the same time, he opens up the lives of the Women's Army Corps and Red Cross girls who served in England with them and feared for the men in the skies, and he hasn't flinched from recounting the devastation of bombing or the testimony of shocked German civilians.

Drawing on first-hand accounts from diaries, letters, and his personal audio recordings, the author has brought to life the ebullient Americans' interaction with their British counterparts, unveiling stories of humanity and heartbreak. Thanks to America's bomber boys and girls, the tide of World War II shifted forever.

Kevin Wilson has spent most of his working life as a staff journalist on British national newspapers, including the Daily Mail and the Sunday Express. He is the author of Blood and Fears and Airborne in 1943, also published by Pegasus Books.

An intimate, often affecting look back at a group of young men who established an American air superiority that persists to this day.

Wilson has written a comprehensive history of the Eighth Air Force. By drawing on letters, diaries and his own interviews with the airmen of the Eighth, Wilson offers fresh material.

A highly readable and intimate account. A well-researched and well-written history of a significant aspect of World War II. For most collections.

Wilson’s all-guns-blazing history of the United States Army Air Forces boys and girls covers everything from Glenn Miller dances and gifts of silk stockings to nerve-wracking daylight raids over Germany. It flies.

A sweeping history of the time period that includes the decisions to keep attacking, despite the losses. It captures not only the experiences of the bomber crews but also the British population, the U.S. fighter squadrons providing escort, and the ground support personnel. The author’s admiration for the courage, sacrifice, and skill of the bomber crews is evident in every chapter.

An excellent telling of the 8th Air Force’s strategic-bombing campaigns. Wilson reveals in this action-packed book not only the bloodshed and historic heroism of the 8th Air Force but also the personal stories and efforts of the Women’s Army Corps and Red Cross women who served in England. An amazingly detailed story of the extreme bravery, heroism, and heartbreak that ultimately turned the tide of World War II. A great addition for anyone’s library on World War II history.

Kevin Wilson has gathered together a treasure trove of unique stories from an incredible range of sources. Tense, thrilling and often tragic, his book brings to vivid life the everyday heroism of the American bomber boys.

The whole book—style, information, readability (and other merits I can’t express as I’m not that literary) are great! One of the most enjoyable I have read; hard to put down.
or
Not Currently Available for Direct Purchase
Copyright © 2020 American Booksellers Association