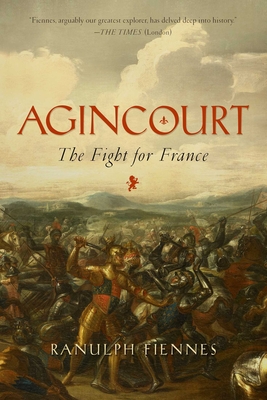 The Fight for France

Sir Ranulph Fiennes' dynamic account of the Battle of Agincourt gives a unique perspective on one of the most significant battles in English history.

On 25th October 1415, on a French hillside near the village of Agincourt, four men sheltered from the rain and prepared for battle. All four were English knights—ancestors of Sir Ranulph Fiennes—and part of the army of England's King Henry V. Across the valley, four sons of the French arm of the Fiennes family were confident that the Dauphin's army would win the day . . .


Sir Ranulph Fiennes explains how his own ancestors were key players through the centuries of turbulent Anglo-French history that led up to Agincourt, and he uses his experience as expedition leader and soldier to give us a fresh perspective on one of the bloodiest periods of medieval history.

With fascinating detail on the battle plans, weaponry, and human drama of Agincourt, this is a gripping evocation of a historical event integral to English identity. Six hundred years after the Battle of Agincourt, Sir Ranulph Fiennes casts new light on this epic event that has resonated throughout British and French history.

Sir Ranulph Fiennes is the first man to have reached both poles by surface travel and the first to have crossed the Antarctic Continent unsupported. He is the only person in the world to have been awarded two clasps to the Polar Medal for both the Antarctic and Arctic regions. Fiennes also led the first polar circumnavigation of the earth. In 1993 Her Majesty the Queen awarded Fiennes the Order of the British Empire (OBE) because, on the way to breaking these historic records, he has raised over twenty millions dollars for charity. In 2003 he ran seven marathons in seven days on seven continents in aid of the Heart Foundation. In 2009 he became the oldest Briton to reach the summit of Everest.

Praise For Agincourt: The Fight for France…

Fiennes
provides a unique perspective of medieval history as a direct ancestor of
nobility that fought for both the English and French at Agincourt.
Conversational and well-paced. A fascinating and immensely readable narrative
of Agincourt.

Vigorous. Fiennes both provides an effective narrative and places the battle in context.

Fiennes, arguably our greatest explorer, has delved deep into history.

Fiennes takes us through the complicated history before and after Agincourt, and his informal narration has something of the quality of an elder recalling the past.

Fiennes,
a renowned polar explorer and British military veteran, brings a distinctive
point of view to his recounting of the 1415 Battle of Agincourt. A stylish,
substantive account.

Written
with enthusiasm, Fiennes’ ancestral accent on Agincourt stands well as an
account of the battle.

What is most fascinating is the extent to which his family contributed to the shaping of England and France, as knights, noblemen and even those who sat on thrones.