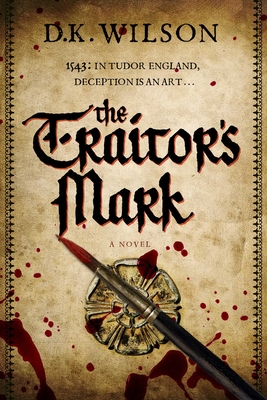 The Real Crime: Hans Holbein, King Henry VIII's portrait painter, died in the autumn of 1543. A century later a chronicler reported that the artist had succumbed to plague, yet there is no contemporary evidence to support this. Suspicions have been raised over the centuries, but the mystery of what actually happened remains unsolved to this day.Our Story: Young London goldsmith Thomas Treviot is awaiting a design for a very important jewelry commission from Hans Holbein. When the design fails to turn up, Thomas sends a servant to track Holbein down, only to discover that the painter has disappeared. In his hunt for Holbein and the lost design, Thomas is led into a morass of dangerous political intrigue, Spanish spies and courtiers that is more treacherous than he could ever have anticipated . . .

Praise For The Traitor's Mark…

A richly-atmospheric plot. Skillful plotting and pacing. Wonderfully evok[es] the street-level reality of Tudor-era England in its weathers and sights and smells and even in its unexpected beauties. And because nobody really knows how exactly Hans Holbein met his end, the plot is charged with genuine suspense as it boils along.

A gripping Tudor
historical. Wilson
keeps the twists coming as he brings the past to vivid life. Fans of C.J.
Sansom and Rory Clements will be pleased.

Masterful and lively. Wilson writes with great conviction and a breathtaking attention to the kind of personal detail that makes his books such compelling reading.
— Alison Weir, #1 New York Times bestselling author

Wilson interrelates the personal and political with an effectiveness that few other biographers have matched.

In this exciting, scholarly book, the reader sees England and its religion being remade as men fight for office and power under an increasingly sour, unbalanced monarch.