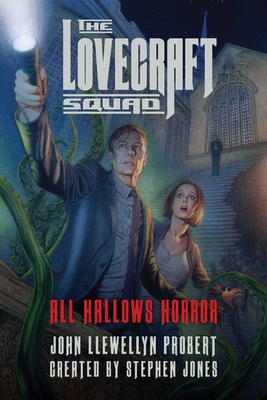 All Hallows Horror: A Novel

The first novel in a new series following the exploits of a secret organization dedicated to battling the eldritch monstrosities given form in H. P. Lovecraft's fevered imagination.

There has always been something wrong about All Hallows Church. Not just the building, but the very land upon it stands. Reports dating back to Roman times reveal that it has always been a bad place—blighted by strange sightings, unusual phenomena, and unexplained disappearances.

So in the 1990s, a team of para-psychiatrists is sent in to investigate the various mysteries surrounding the Church and its unsavoury legends. From the start, they begin to discover a paranormal world that defies belief. But as they dig deeper, not only do they uncover some of the secrets behind the ancient edifice designed by “Zombie King” Thomas Moreby but, hidden away beneath everything else, something so ancient and so terrifying that it is using the architect himself as a conduit to unimaginable evil.

After four days and nights, not everybody survives—and those that do will come to wish they hadn’t. Imagine The Haunting of Hill House, The Amityville Horror, The Entity and The Stone Tape rolled together into the very fabric of a single building. And then imagine if all that horror is accidentally released . . .

Praise For The Lovecraft Squad: All Hallows Horror: A Novel…

"Zombies and Cthulhu—need I say more? This novel takes elements from the Zombie Apocalypse! series and weaves them expertly with elements from the H.P. Lovecraft mythos to bring us an energetic and detailed view of a world teetering on the brink of destruction by way of the eldritch gods. This one is a winner, bringing together two horror genres successfully and never compromising on the details or fear-inducing situations."
— Criminal Element

"A smashing, wild ride that should be on your reading list."
— Scifi Movie Page

"The pieces of a truly great ghost story are all present, with the added fun of the exploits of [the Lovecraft Squad]. Horror fans will enjoy this one."
— Booklist

"Smartly combining Lovecraftian and classical mythologies, Probert does an excellent job of creating a suspenseful and often horrific atmosphere without indulging in gratuitous gore or violence. Fans of Lovecraft and horror should enjoy."
— Library Journal

"One of our field’s most celebrated horror editors."
— Locus, The Magazine of Science Fiction & Fantasy [praise for Stephen Jones]

"A journey into the stratosphere of the horror genre, where the bizarre and grotesque are indistinguishable from the sublime and underlying it all is a fearsome engine of metaphysics. A tour de force that dazzles with the wealth of invention and the sheer spectacle committed to the page, with characters and reader never given a moment to catch their breath. I loved every minute of this book."
— Black Static Magazine

John Llewellyn Probert is the author of more than a hundred published short stories, several novellas, and the novels The House That Death Built and Unnatural Acts. His first short story collection, The Faculty of Terror, won the Children of the Night award for Best Work of Gothic Fiction, and he won the British Fantasy Award for his novella The Nine Deaths of Dr Valentine. Everything he is up to writing-wise can be found at www.johnlprobert.com.

Stephen Jones is one of Britain's most acclaimed horror and dark fantasy writers and editors, with more than 140 books to his credit. He is a Hugo Award nominee and the winner of three World Fantasy Awards, three International Horror Guild Awards, four Bram Stoker Awards, twenty-one British Fantasy Awards, and a Lifetime Achievement Award from the Horror Writers Association. You can visit his web site at www.stephenjoneseditor.com or follow him on Facebook at Stephen Jones-Editor. He lives in London, England.
Loading...
or
Not Currently Available for Direct Purchase