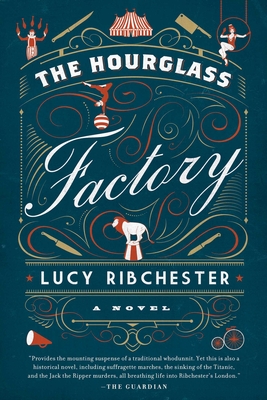 Amid the drama of the suffragette movement in Edwardian London, the disappearance of a famous trapeze artist in the middle of her act leads a young Fleet Street reporter to an underworld of circus performers, fetishists, and society columnists.

The suffragette movement is reaching a fever pitch, and Inspector Frederick Primrose is hunting a murderer on his beat. Across town, Fleet Street reporter Frances “Frankie” George is chasing an interview with trapeze artist Ebony Diamond. Frankie finds herself fascinated by the tightly-laced acrobat and follows her to a Bond Street corset shop that seems to be hiding secrets of its own. When Ebony Diamond mysteriously disappears in the middle of a performance, Frankie and Primrose are both drawn into the shadowy world of a secret society with ties to both London's criminal underworld and its glittering socialites.

How did Ebony vanish, who was she afraid of, and what goes on behind the doors of the mysterious Hourglass Factory? From newsrooms to the drawing rooms of high society, the investigation leads Frankie and Primrose to a murderous villain with a plot more deadly than anyone could have imagined.

Praise For The Hourglass Factory: A Novel…

"Ribchester leaves nothing out, no stone unturned and no drama unexplored, which is a big gamble, but the novel feels expertly paced and plotted. The characters complement one another brilliantly, and the novel actually brings some sharp insights to the history of the women's movement. How can one resist such a deliciously over-the-top, historically savvy novel? A romp with flair and substance."
— Kirkus Reviews, starred review

"The Hourglass Factory is a lively, funny, unexpected book … it’s got vivid characters and a great sense of curiosity – a splendid opening to a career."
— USA Today

"Provides the mounting suspense of a traditional whodunnit. Yet this is also a historical novel, including suffragette marches, the sinking of the Titanic, and the Jack the Ripper murders, all breathing life into Ribchester’s London."
— The Guardian

"Fine flourishes from historical incidents in its prologue and epilogue make for a memorable start and finish."
— The Independent

"Ribchester’s energetic debut builds a quirky mystery around the 1912 suffrage demonstrations and hunger strikes in London…The novel’s phantasmagoric world and complex themes, from gender and class inequity to the justification for violent activism, are fascinating."
— Publishers Weekly

"A tremendous debut novel, a bull-roarer of a tale that manages to perfectly and cleanly evoke the squalor of London in 1912, and create strong and believable female characters, a duo of accomplishments most seasoned novelists can’t manage. Crystal clear descriptions, crisp dialogue and a sense for the action scene that rivals Hollywood’s. Lucy Ribchester is a welcome addition to the ranks of historical murder mystery writers."
— Bookgasm

"Authentic historical fiction and a gripping whodunit with murder at its core."
— Minneapolis Star Tribune

"Early 20th century London glitters in Ribchester's hands. Her Edwardian world is colorful and risqué. Characters are described with sharp, physical details and they spring to life on the page. From the aging courtesan, holding court from her bed in her London mansion, to Milly the snake-charmer, from the houses of Parliament to the Bow Street magistrates court, The Hourglass Factory is a delight to the senses."
— BookBrowse, Editor's Choice

"A big debut with a convoluted plot: its energy, crackle and humour is infectious."
— Daily Mail

"A rollicking good read. A good old-fashioned piece of storytelling with a bit of suspense and some nifty plotting."
— A Life in Books?

"This debut is both a satisfactory mystery and well-researched historical novel. Ribchester successfully captures the sights and smells of Edwardian England at a time of tumultuous social change and events—suffragette window smashing, the sinking of the Titanic, and even the Jack the Ripper murders. History and mystery buffs will enjoy this lively look at an era now popularized by Downton Abbey."
— Library Journal

Lucy Ribchester was the winner of the Scottish Book Trust New Writer's Award 2013. Her travel writing has appeared in The Guardian and Scotland in Trust magazines and her short stories have been published by, among others, Vintage Script, Ether, and Ellery Queen's Mystery Magazine. Lucy lives in Edinburgh.
Loading...
or
Not Currently Available for Direct Purchase