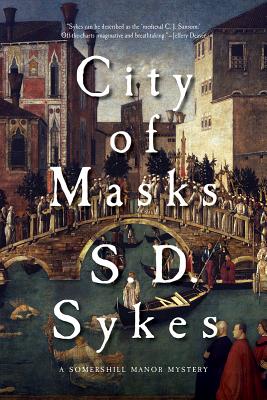 Young Lord Somershill flees England for the wonders of Venice, where he becomes involved in a bizarre murder investigation that plunges him into the depths of this secretive medieval city.

It’s 1358, and young Oswald de Lacy, Lord Somershill, is delayed in Venice as he awaits a pilgrim ship to the Holy Land. While the city is besieged by the King of Hungary, Oswald stays at the house of an English merchant, and soon comes under the spell of this decadent and dazzling island state that sits on the edge of Europe—where East meets West.

But Oswald has secrets. He is running away from something in England—a shadow that still haunts him, no matter how much he consoles himself with the delights of Venice. When he finds a dead man at the carnival, he is dragged into a murder investigation that draws him deep into the intrigues of this paranoid, mysterious city.

From the dungeons of the Doge’s Palace to the convent-brothel of Santa Lucia, Oswald must search for a murderer in this bewildering maze of alleys and canals. When he comes up against the feared Signori di Notte, the secret police, Oswald learns that he is not the only one with something to hide. Everyone is watching (or trailing) someone else; and nobody in Venice is who they appear to be. Masks, it seems, are not only for the carnival.

"S.D. Sykes spares readers none of the 14th century’s malodorous streets and dark alleyways as Oswald tries to unmask the killer and save his own life."
— BookPage

"We are plunged into Sykes’ rich soup of Venetian intrigue; period detail; and increasingly intricate plotting, all with the deeply realized character of Lord Somershill fighting his own demons while investigating. A brilliant addition to the Somershill Manor Novels."
— Booklist (starred)

"Sykes’s gamble in putting Oswald in unfamiliar terrain pays off, as she again blends a detailed immersion in the time period with a clever mystery plot line."
— Publishers Weekly (starred)

"The time period is well represented and believable, although the novel has the style of a modern thriller, with layer upon layer of rising tension, risks, and psychological hurdles for its protagonist as he races against time to solve the mystery and to survive. Fast-paced and suspenseful throughout, this tightly written story is intriguing and original and offers much to appreciate."
— Historical Novels Review

"A Venice whose ancient glories still survive today provides the background for an investigation whose solution is secondary to identifying the cause of Oswald's angst."
— Kirkus Reviews

"This third series outing offers further insights into Lord Somershill and the past that bedevils him, along with sophisticated plotting, intrigue, and immersion in a fascinating historical setting."
— Library Journal

S. D. Sykes received an MA in Writing from Sheffield Hallam in England. She attended the novel writing course at Curtis Brown, where she was inspired to write Plague Land. She lives in England.
Loading...
or support indie stores by buying on
(This book is on backorder)