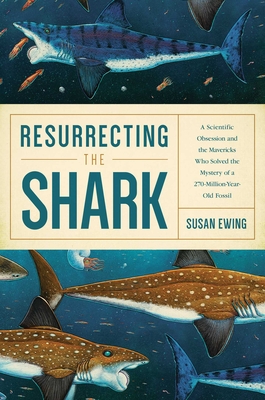 A prehistoric mystery. A fossil so mesmerizing that it boggled the minds of scientists for more than a century—until a motley crew of modern day shark fanatics decided to try to bring the monster-predator back to life.

In 1993, Alaskan artist and paleo-shark enthusiast Ray Troll stumbled upon the weirdest fossil he had ever seen—a platter-sized spiral of tightly wound shark teeth. This chance encounter in the basement of the Natural History Museum of Los Angeles County sparked Troll’s obsession with Helicoprion, a mysterious monster from deep time.

In 2010, tattooed undergraduate student and returning Iraq War veteran Jesse Pruitt became seriously smitten with a Helicoprion fossil in a museum basement in Idaho. These two bizarre-shark disciples found each other, and an unconventional band of collaborators grew serendipitously around them, determined to solve the puzzle of the mysterious tooth whorl once and for all.

Helicoprion was a Paleozoic chondrichthyan about the size of a modern great white shark, with a circular saw of teeth centered in its lower jaw—a feature unseen in the shark world before or since. For some ten million years, long before the Age of Dinosaurs, Helicoprion patrolled the shallow seas around the supercontinent Pangaea as the apex predator of its time.

In this groundbreaking book, Susan Ewing reveals these revolutionary insights into what Helicoprion looked like and how the tooth whorl functioned—pushing this dazzling and awe-inspiring beast into the spotlight of modern science.

Praise For Resurrecting the Shark: A Scientific Obsession and the Mavericks Who Solved the Mystery of a 270-Million-Year-Old Fossil…

"Ewing’s talent for narrative makes the story of the diverse players a sure page-turner."
— Natural History

"Ewing blows the dust off dry scientific reportage with her lively style and wit. Her book should have broad appeal to a wide range of readers—sharks, of course, are a cultural phenomenon, and paleo sharks only double the fun."
— Library Journal

"Ewing shares the century-long story of scientific investigation that resulted in the discovery of Helicoprion. Ewing brings to life the personalities of those who wrestled with these fossils to reveal ‘the beautiful, frustrating, addictive, rewarding way’ that research works."
— Publishers Weekly

"Long before nature writer Susan Ewing mentions Indiana Jones in Resurrecting the Shark, readers are ensnared in a quest for a 270 million-year-old fish fossil that feels like riding shotgun with Indy. Meticulously researched and spanning numerous disciplines, along with a ‘rockin' lot’ of evolution, Resurrecting the Shark is the compelling saga of how an ancient ocean oddity became a global passion project."
— Shelf Awareness

"A fascinating deep-dive into the life and times of Helicoprion, a whorl-toothed shark from the Paleozoic past.  Susan Ewing applies liberal doses of humor and enthusiasm to spin a compelling tale that neatly blends history of science, visual art, and modern paleontological research to recreate this once-mysterious animal and its kin."
— Anthony J. Martin, author of "The Evolution Underground"

"A wonderful book that traces the history of the discovery of the Helicoprion, the 'Buzzsaw Shark,' one of the strangest vertebrate fossils ever to come to light.  Susan Ewing travels through 400 million years of fish evolution and four hundred years of scientific research. Entertaining and filled with panorama of eccentric scientists, rock hunters, and artists who have fallen under the spell of this huge predator."
— John A. Musick, author of "The Shark Chronicles"

"A rocking good detective story with geology, art, and sharks!"
— David R. Montgomery, author of "Growing a Revolution" and "The Rocks Don't Lie"

"Susan Ewing traces how the Helicoprion fossil obsessed scientists for centuries, and how new research could resolve how its teeth fit into its jaw."
— Nature

Susan Ewing is the author of The Great Alaska Nature Factbook, The Great Rocky Mountain Nature Factbook, and Going Wild in Washington and Oregon, as well as two children's books. Her nonfiction articles and essays have appeared in Salon, Pacific Standard, Outside Bozeman, Gray's Sporting Journal, Big Sky Journal, The Seattle Times, and other publications. Born and raised in Kentucky, she graduated from University of Alaska-Fairbanks and now lives in Bozeman, Montana.
Loading...
or
Not Currently Available for Direct Purchase