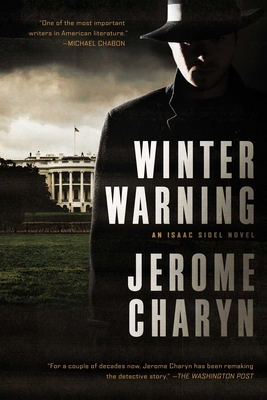 The climactic conclusion to the iconic Isaac Sidel mystery series, which finds Charyn’s acclaimed hero facing his toughest showdown yet, this time as commander-in-chief . . .

Reflecting our own world like a volatile funhouse mirror, Winter Warning lures us back to the 1980s, an era that could have been ripped right out of our most recent political upheaval. Isaac Sidel should have been vice president, banished to some far corner of the West Wing, but the president-elect has been forced to resign or face indictment for his crooked land deals—and Sidel becomes the accidental president. He’s a maverick, a crusader with a Glock in his belt, who defies both the Republicans and the Democrats. He seems haunted by Lincoln’s ghost, and the presidential palace becomes his own “great white jail,” as it did for Harry Truman.

There’s never been another president quite like Isaac Sidel, New York’s former police commissioner and mayor. There’s a secret lottery created by some bankers in Basel to determine the exact date of Sidel’s death. And Sidel has to outrun this lottery in order to save himself. His greatest allies are not the Secret Service or the DNC, but a former Israeli prime minister who was a explosives operative during the British occupation of Palestine . . . as well as a mysterious billionaire who belongs to a brotherhood of killers and counterfeiters. His only companions in the capital are the captain of his helicopter fleet and a sexy naval intelligence officer who realizes that something has gone amuck at Camp David, when a band of mercenaries arrive with their sights trained on Sidel.

"Charyn’s feisty style is as strong as ever. This is American prose at its punchiest. Charyn excels at sketching the presidency’s effect on a reluctant incumbent. Winter Warning brings a bravura series to a fitting end."
— Dennis Drabelle, The Washington Post

"Manically inventive, proudly undisciplined, and peopled with dark lords and ladies best characterized by wildly inflated epithets—in other words, nothing at all like any presidencies since 1988."
— Kirkus Reviews

"Considered by many the most innovative crime writer of his generation, Charyn brings a rip-roaring conclusion to one astounding and outstanding series."
— Booklist

"Very exciting and raises some interesting moral questions."
— The Reporter

Jerome Charyn published his first novel in 1964. He's the author of Johnny One-Eye, The Secret Life of Emily Dickinson, I Am Abraham, and dozens of other acclaimed novels as well as nonfiction works. His short stories have appeared in The Atlantic, Paris Review, American Scholar, Epoch, and Ellery Queen. Charyn's popular crime novels, featuring homicide detective Isaac Sidel, inspired a new animated drama series: Hard Apple debuts on the small screen in 2017, helmed by Hollywood insider James Gray (The Immigrants) and illustrated by famed artists Asaf and Tomer Hanuka. He lives in Greenwich Village, New York.
Loading...
or
Not Currently Available for Direct Purchase