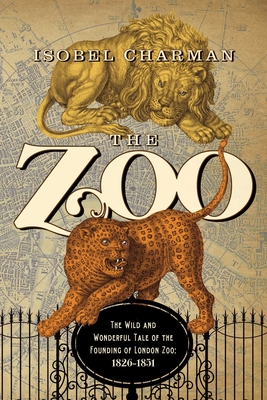 Set in the heart of swirling, Dickensian London, the wondrous history of a unique institution and the incredible characters—human and animal—that populated it.

The founding of a zoo in Georgian London is a story of jaw-dropping audacity in the Age of Empire. It is the story of diplomats, traders, scientists, and aristocratic amateur naturalists charged by Sir Stamford Raffles with collecting amazing creatures from all four corners of the globe.

It is the story of the first zoo in history, a weird and wonderful oasis in the heart of the filthy, swirling city of Dickensian London, and of the incredible characters, both human and animal, that populated it—from Charles Darwin and Queen Victoria to Obaysch the celebrity hippo, the first that anyone in Britain had ever seen. This is a story of Victorian grandeur, of science and empire, and of adventurers and charlatans.

And it is the story of a dizzying age of Empire and industrialization, a time of change unmatched before or since.

This is the extraordinary story of London Zoo.

"[A] sprightly tale of the London Zoo from its conception in 1824 to the death of its longtime president in 1851. As The Zooengagingly shows us, caring for and observing caged beasts transformed our view of animals—and of ourselves."
— Wall Street Journal

"An incredible piece of detective work, told through the eyes of many key players and famous figures. A bold, no-holds-barred look at one zoo’s beginning."
— Science News

"While all of the primary characters are real, Charman uses creative text and careful research to reimagine aspects of their personalities. Recommended for anyone interested in zoology and the intersection of history and science."
— Library Journal

"In her charming, engaging narrative, the author deftly assumes the points of view of her characters, in the spirit of a Victorian novelist. A deeply researched, terrifically entertaining exploration of the London Zoo ‘through the eyes of some of the people who made it happen.’"
— Kirkus Reviews

"An affecting narrative of the first 25 years of the Zoological Society of London through the stories of seven of its most influential contributors. Charman provides historical and atmospheric details of the era through the eyes of her characters. The book is nuanced, often entertaining, and also tragic, as the Society faced massive mortality rates in its early years."
— Publishers Weekly

"A vivid, panoramic account of the first great public zoo. An intriguing account of a colorful story immersed in Dickensian times."
— Foreword Reviews

"Charman immerses the reader in Dickensian London as she presents the human side of creating a zoo from scratch. Charman delves into the disparate personalities of some of the major players and captures the flavor of the politics as well as the excitement generated by the zoo as the great minds of the age created a scientific wonder."
— Booklist

Isobel Charman is an award-winning television producer. She has spent the last decade working in factual documentary production as a writer, researcher, producer, and director and has worked on award-winning films for U.K., European, and U.S. broadcasters. For The Zoo, she has made unprecedented use of the vast archives at the Zoological Society of London. She lives in London.
or
Not Currently Available for Direct Purchase