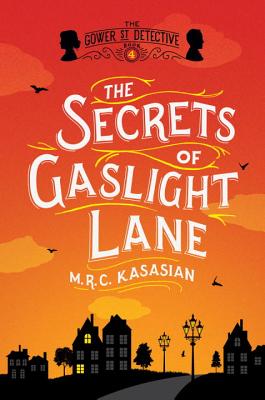 The Secrets of Gaslight Lane

London, 1883. All is quiet at 125 Gower Street. Private detective Sidney Grice is studying up on the anatomical structure of human hair whilst his ward, March Middleton, sneaks upstairs for her eighth secret cigarette of the day. The household is, perhaps, too quiet.

So, when a beautiful young woman turns up at the door, imploring London's foremost private detective to solve the mystery of her father's murder, Grice can barely disguise his glee.

Mr. Nathan Garstang was found slaughtered in his bed, but there is no trace of a weapon or intruder. A classic locked-room case. But what piques Grice's interest is the crime's link to one of London's most notorious unsolved murders. Ten years ago, Nathan's uncle aunt and servants were murdered in their sleep in the very same house.

Now, it seems, the Garstang murderer is back . . .

"This series is reminiscent of Dickens and Lemony Snicket with reminders of Sherlock Holmes. The writing is funny, witty, and macabre, and the characters are eccentric and quirky."
— Historical Novels Review

"The Secrets of Gaslight Lane reveals a mystery wrapped in an enigma, with hints, hidden passages, dropped lockets, and cagey household servants.With its tongue quite firmly in its cheek, it out-Holmeses Holmes, it out-Victorias Victoria. It is a burlesque of all Victorian novels and, probably most especially, of our modern notions of Victorian novels."
— Reviewing the Evidence

M. R. C. Kasasian is the author of The Mangle Street Murders,The Curse of the House of Foskett, Death Descends on Saturn Villa, and The Secrets of Gaslight Lane, all available from Pegasus Crime. He divides his time between Suffolk and Malta.
Loading...
or
Not Currently Available for Direct Purchase