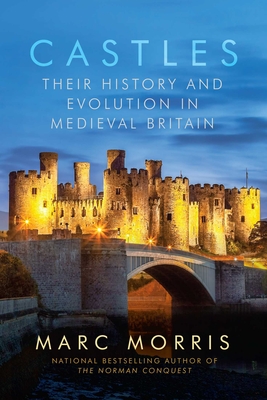 Their History and Evolution in Medieval Britain

From the author of The Norman Conquest and A Great and Terrible King comes a sweeping and stunning history of the most magnificent castles in Britain.

Beginning with their introduction in the eleventh century, and ending with their widespread abandonment in the seventeenth, Marc Morris explores many of the country’s most famous castles, as well as some spectacular lesser-known examples.

At times this is an epic tale, driven by characters like William the Conqueror, King John and Edward I, full of sieges and conquest on an awesome scale. But it is also by turns an intimate story of less eminent individuals, whose adventures, struggles and ambitions were reflected in the fortified residences they constructed. Be it ever so grand or ever so humble, a castle was first and foremost a home.

To understand castles—who built them, who lived in them, and why—is to understand the forces that shaped medieval Britain.

Marc Morris is a historian and broadcaster specializing in the Middle Ages. He is the author of A Great and Terrible King, King John, and the Wall Street Journal and USA Today bestselling The Norman Conquest. He lives in England.

Praise For Castles: Their History and Evolution in Medieval Britain…

Enchanting journey through feudal England in the wake of Norman castle building. An engaging work that will no doubt prompt enthusiastic visits to castles around Britain.


Seeking to answer the question of how to precisely define castles, Morris has created a riveting tale of politics and violence, technology and innovation. Morris’ slim yet detailed book moves us beyond an I-know-it-when-I-see-it impression and toward a real understanding of these buildings, creating a more vivid, rich and accurate view of England, Wales and Scotland in the medieval period.

Captivating and entertaining. More than just a study of architecture, weaponry, and personalities, Castle pieces together a comprehensive overview that gives a fresh take on medieval and early modern Britain and the forces that shaped it. Whether ruined or intact, castles still have the power to fire the imagination, and Marc Morris leaves you in no doubt why.